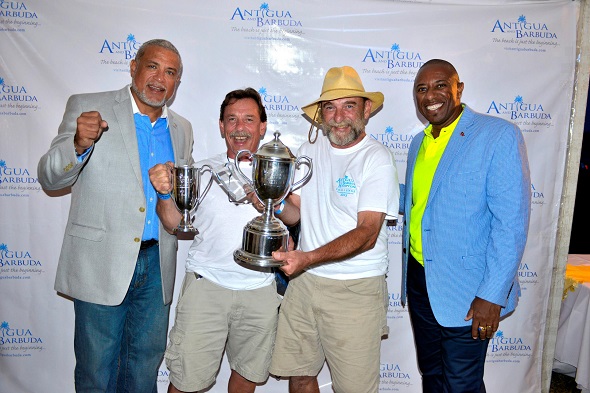 Dubbed, “the largest sailing prize to be awarded in East End history”, the exciting race was later followed by the Awards Ceremony and Cocktail Party on the beach which was transformed into an authentic “Antigua and Barbuda Village” coupled with a spectacular view of the ocean. Racers and Hamptonites were serenaded by local sounds of steel pan and calypso, tasted locally inspired eats and treats and experienced a local cocktail with a special mix of Antigua and Barbuda’s award winning English Harbour Rum.

The brainchild of Tourism Minister the Hon. John Maginley MP, the Antigua and Barbuda Hamptons Challenge 2013 winners who coveted the Grand Prize, donated by the Antigua and Barbuda Ministry of Tourism was sibling duo Mike and Lou Grignon with their boat “Street Fighter”. The brothers were ecstatic about their win and stated, “This is the crowning achievement of our boating career and we are so excited about experiencing Sailing Week in Antigua next year, that’s the best part of it.”

The Hon. John Maginley, Minister of Tourism, who awarded the winning cup to the elated brothers, expressed his congratulations stating, “The success of the 1st and now 2nd Antigua and Barbuda Hamptons Challenge is testimony that Antiguans and Barbuda and East Enders alike have a passion for sailing that is undeniable. It is this very connection that makes the Hamptons a perfect market for promoting the Destination and Sailing Week on a whole. This is certainly a win- win partnership for both.”

Adding to the festivities were other members of the Antigua and Barbuda team namely Mr. Dean Fenton and Ms. Shermain Jeremy who also shared her vocal talents with the eager audience. Also direct from Antigua were Kathy and Hans Lammers from the Antigua Sailing Week Regatta Organising Committee and popular radio personality and media influencer Mr. Algernon “Serpent” Watts who was the official host of the event. The CEO of the Tourism Authority Mr. Colin James, who also attended the event expressed, “I am so pleased with the outcome of the Antigua and Barbuda Hamptons Challenge and the opportunity that this gives us to target this key marketing niche. The exposure that our destination has gained from this event in the Hamptons and the data that we have captured will position us to grow the event to eventually make it one of the most prestigious sailing events in the northeast area. This is critical to our strategy to grow our yachting tourism product here in the U.S.”

Multiple vacation packages were raffled and auctioned compliments of The Nonsuch Bay Resort, Copper and Lumber Hotel, The Inn at English Harbor and the Sugar Ridge Resort. All proceeds from the event will go directly to I-Tri and The Breakwater Yacht Club Junior Sailing, two East-End charities which benefit over 2,000 East End youth. American Airlines and the American University of Antigua were also involved as participating sponsors.

The Annual Antigua and Barbuda Hamptons Challenge is co-ordinated by Mr. Rob Roden, an avid sailor and local Hamptonite who is the publisher of the well-known Captain’s Guide Magazine. The lead-up to the event was heavily featured in several local publications and radio stations to include the notable Dan’s Paper, The Sag Harbour Express which carried a full two- page spread on the day of the event, and 92.1 FM.

The Ministry of Tourism, along with the Antigua and Barbuda Tourism Authority looks forward to continue building upon the momentum of this event and making next year’s Antigua and Barbuda Hampton Challenge an even more successful one, where it will once again invite yachties and residents from the area to sail “Hamptons in the summer, Antigua and Barbuda the rest of the year”.