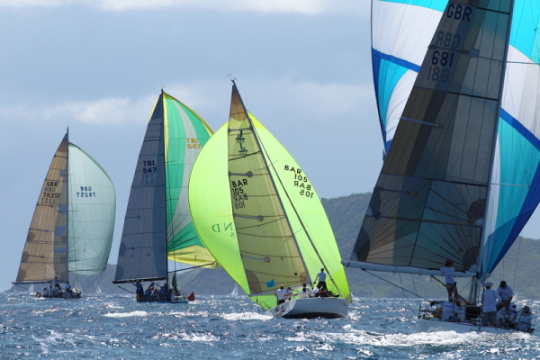 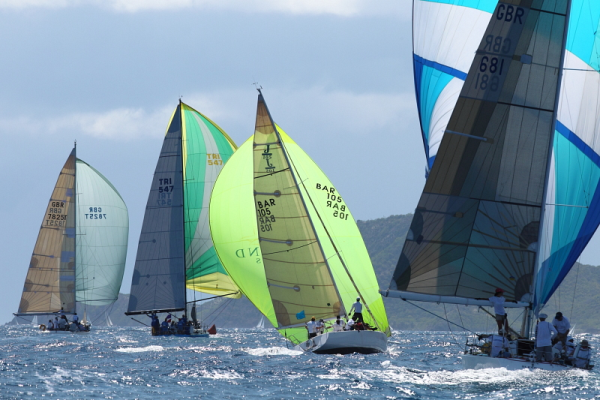 Yachts from around the world will compete in the 45th edition of Antigua Sailing Week © Tim Wright/Photoaction.com

At least 17 yachts will take part in the Guadeloupe to Antigua Race on Friday, April 24, which has been running even longer than Antigua Sailing Week. So far 43 yachts have entered the Pearns Point Round Antigua Race which takes place on Saturday, April 25. Pearns Point is a new diamond sponsor of Antigua Sailing Week. Located on the stunning west coast of Antigua, Pearns Point is a 137-acre peninsula with 8 pristine beaches and panoramic views of the turquoise Caribbean Sea. Planned as a luxury development are 67 plots and a 5-star branded boutique hotel.

“It is highly probable that we will set new records for both races but we need to sail well, especially for the Guadeloupe Race,” commented Jules Verne Record Holder, Brian Thompson. “Mari Cha IV’s record has stood for over 10 years; it is an extremely fast time. The wind looks to be from the southeast which is a good angle for both courses but I doubt if we will see 20 knots of wind, which would be ideal. So my prediction is, barring gear failure, we should set new record times but they will not be the fastest we are capable of.”

Antigua Sailing Week starts on Sunday, April 26, with racing for all classes off the south coast of Antigua. Classes are yet to be finalised but the CSA Racing fleet is expected to be the biggest for many years. Jean-Paul Riviere’s Finot Conq 100, Nomad IV will be the largest yacht competing and former ISAF Match Racing World Champion and America’s Cup sailor, Damien Lehl, will be calling tactics. Two TP52s will be duking it out, last year’s class runner up, Balearia, skippered by Joan Navarro and this year’s BVI Spring Regatta champion, Conviction, skippered by Peter Lewis. Daniel Figueirido’s Argentine team racing Soto 53, Humildad Zero is an unknown quantity. Two Volvo 60s are expected to have a titanic tussle: Ambersail from Lithuania skippered by Saulius Pajarskas and Cuba Libre, driven by Antigua Yacht Club Commodore, Franklyn Braithwaite.

A sizeable eight multihulls have entered Antigua Sailing Week including two of the latest speed machines from Gunboat. Eduardo Perez’s G4, Timbalero III will be flying on its foils with America’s Cup winner, Shannon Falcone on board. The stunning Gunboat 55 Toccata, owned by Chris and Carolyn Groobey will be turning heads, as will Anthony McVeigh’s aptly named Bobby Dazzler of London.

At present, 12 teams have entered the inaugural Royal Southern Inter-Yacht Club Challenge which is open to any team wishing to represent its yacht club with a minimum 50% of crew on board being members of the club. Organised by Gordon Cossar, entries have been confirmed by yacht clubs from around the world, including Great Britain, Antigua, Ireland and South Africa. A special silver trophy has been commissioned for the Challenge.

Notable visitors to Antigua Sailing Week from overseas include Nigel Passmore’s team from Plymouth UK who will be hoping for lift off, racing J/133 Apollo 7. Norwegian X-55 Enigma VII is skippered by Per Arne Nilsen who has competed at two Olympic Games. Alex Sastre’s Salona 44, Pretty Vegas has sailed down from Florida to defend last year’s win in CSA 2. Ross Applebey’s Oyster 48, Scarlet Oyster has been unbeaten all season having raced all over the Caribbean, but a class win at Antigua Sailing Week has eluded his Guernsey-based team for the last two years. Richard Matthews has competed at the regatta for years and returns with his team, including Irish sailing legend Harold Cudmore calling tactics, on Grand Soleil 56, Shine. Oyster 82, Starry Night of the Caribbean is also a regular participant.

Antigua Sailing Week is well-known for fantastic racing and the shoreside parties are just as legendary. Each day after racing, the daily prize giving is the place to rub shoulders with like-minded sailors from all over the world. The big party night is on Tuesday, April 28 at Nelson’s Dockyard. The headline act will be legendary Roots Reggae Band Steel Pulse, alongside Ed Robinson and Antiguan superstar Tian Winter. The Lay Day Beach Party is Wednesday, April 29, featuring the Nonsuch Bay RS Elite Challenge at Pigeon Point.