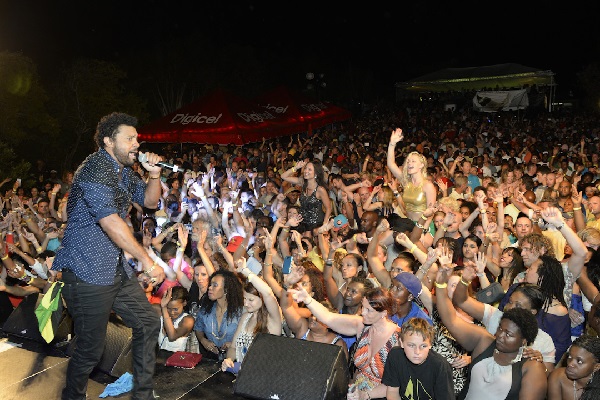 Thousands of fans flocked to Shirley Heights on Tuesday for the big concert of Antigua Sailing Week, presented by English Harbour 5 Year Old Rum. Antigua soca star, Tian Winter got the party started with a strong Caribbean vibe before international star, Shaggy wooed the dancing crowd with an energetic show of monster hits including, Mr. Boombastic and It wasn’t me!  The atmosphere was charged and happy as Shaggy whipped the audience into a frenzy with plenty of interaction with the assemblage.

“The majority of my hits are very well received in the Caribbean,” smiled Shaggy before going on stage. “I have played in Antigua about three times already but we have a few new songs that we haven’t played before and the capacity crowd is ready for them. There are a lot of sailors here too and that adds a really good vibe. Everybody likes the water and I was out there today on a boat. I wasn’t racing, just chilling out and relaxing. One thing that I like about Antigua is the beaches and the crystal clear ocean. It reminds me of Jamaica a lot, but Antigua has more of an island vibe and it hasn’t developed into a massive city. Here you get the sense that you are on an island where everybody knows each other and people are warm and friendly.”