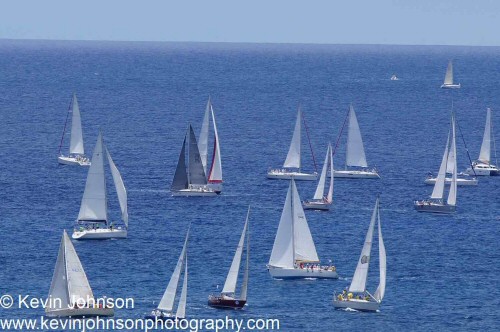 Thursday 2 May was the penultimate day of racing at Antigua Sailing Week and after Lay Day there was a relaxed atmosphere in Nelson’s Dockyard where the majority of the Bareboat fleet reside. Ian Galbraith’s Oyster 53 Jigsaw, racing in CSA 7, is also moored in Nelson’s Dockyard and the sound of bagpipes from the Scottish boat as it left the dock was all-inspiring. Torrential overnight rain raised the humidity and sucked away much of the wind to produce stifling early morning conditions but by the time racing started, 10 knots of breeze had filled in from the southeast, which stayed consistent all day.

With 29 yachts in the Bareboat fleet competing at Antigua Sailing Week, the fleet accounts for close to 200 sailors from all over the world, many of them chartering from Antigua Sailing Week’s Silver sponsor Sunsail. The yachts may not be the fastest on the water but there is no shortage of competition. Races are won by seconds and in today’s light wind affair one bad decision or manoeuvre would be punished by eager competitors.

Hartmut Holtmann has been coming to Antigua Sailing Week for nearly 20 years and his German company, KH+P yachtcharter provides a bespoke service for sailors wishing to have a user-friendly package to allow them to come and race bareboats without the logistical hassle of organising a boat themselves. 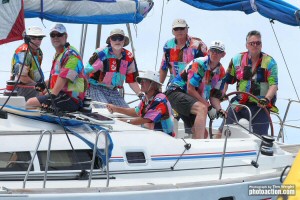 “This year, we have 13 yachts racing,” commented Hartmut. “Many of the sailors have been coming for years and although most of them are from Germany, we also have clients from other countries such as Switzerland, Ireland and Russia. Most of the yachts are supplied by Sunsail, who we have a long standing relationship with. We offer support for our customers right through the regatta and our primary goal is to make sure they all enjoy themselves. Having fun is why everybody comes here. Winning obviously helps but it is not the main objective.”

As conditions looked really fluky for the last day, the Race Committee decided to make an amendment for yachts racing with Committee Boat B and scheduled two races instead of one. Committee Boat B Race Officer Paul Miller not only provided two good races in light airs but also added an element of humour into his address to the fleet. “Everybody comes to Antigua Sailing Week to have a good time. Setting fair courses is the key but it is also important not to forget that people want to enjoy themselves; a little humour goes a long way to achieving that,” said Paul.

To celebrate their class win, See You Later’s crew threw Alfred Geisser into English Harbour after racing. “We have had a fantastic week, really enjoyable both at sea and on shore,” commented Alfred. “But today was really tricky because it was so difficult to decide if we should go inshore or offshore from the start. We will definitely be celebrating tonight!” 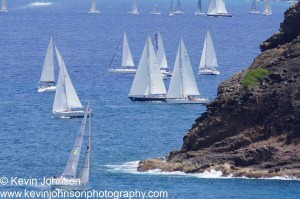 Until today, Christoph Nielsen’s German Jeanneau SO 44i KH+P Bageal had won every race. However a fourth and a sixth today allowed several yachts to threaten its position at the top of Bareboat 2. Garvey Colman’s Irish crew on Warvor had an excellent day coming second in both races and is now just two points behind the class leader. Alexander Pfeiffer is a veteran at Antigua Sailing Week but has an inexperienced crew on KH+P Balaou. The German team was delighted to take Line Honours in the last race to move up to third in class. Michael White’s Dundee had its best day of the regatta winning Race 5 and a third in Race 6 to move up to fourth.

The racing in the Bareboat fleet is extremely close and concentration in today’s light airs was paramount today. However, there is plenty of humour in the fleet. The sight of one of the young female crew stripping off on the last downwind leg and dancing on the coach roof definitely caused a few distractions and added a new meaning to the phrase – Bareboat Racing!

With one race scheduled for the last day of racing at Antigua Sailing Week, several class winners are now decided. Eduardo Wong Lu Vega’s Peruvian Sotto 48, Kuankun, has an unassailable lead in CSA 1. In CSA 3, Philip Lotz’s Swan 42, Arethusa won the last race today to seal class victory with a day to spare. In CSA 6, Geoffrey Pidduck’s Six-metre, Biwi Magic was again unstoppable, scoring her sixth straight bullet to win the class, regardless of tomorrow’s result. In CSA 7B, Sir Hugh Bailey’s CS40, Ugo has also managed six straight bullets and is class champion with a day to spare.

Friday, 3 May will feature the last day of racing at Antigua Sailing Week with several classes still in the balance and the decision on the winner of the coveted Lord Nelson still very much up for debate.