Big Media turn out for the Welcome Party 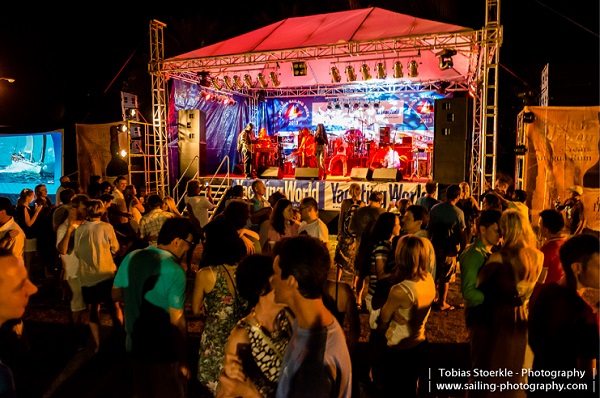 An impressive mix of local and international press were the toasts of a cocktail reception on Saturday night at the Copper and Lumber Store Hotel in the Nelson’s Dockyard.
It was the largest gathering on record of local and international media attending the opening proceedings of Antigua Sailing Week with in excess of fifty media entities from across the globe and here in Antigua and Barbuda having received accreditation to cover Antigua Sailing Week 2013.

Tourism Minister John Maginley was on hand to extend some warm Antiguan hospitality to the international media representatives who were joined by their local peers and sponsors at the reception.

Minister Maginley made very special mention of the local media, who gave an excellent account of themselves by attending in their numbers. The Minister said he was happy to see so many members of the Antiguan press represented at the event and expressed his gratitude for the coverage they were providing of Antigua Sailing Week.

The press corps also benefitted from information about the regatta from Alison Sly Adams, who heads up the shore side organising team and Kathy Lammers, the chairman of the Race Organsing Committee

Formalities aside, the action swiftly moved outside the Copper and Lumber Store Hotel onto the lawn for the welcome party where hundreds of sailors were already gathered following the circumnavigation sprint in the Yachting World Round Antigua Race.

With food stalls and bars spread across the lawn, spirits were high from a good day of racing and the potential for a memorable party. The rest of the night was made into just that after Minister Maginely welcomed the sailors.

Popular local band, Itchyfeet, who features versatile vocalist, Kenne Blessin, and young rising star, Asha, got patrons out of their seats dancing the night away. The festivities continued at Abracadabra even before the last note was struck inside the Dockyard. Popular night club Abracadabra had already sprung to life with the official after party which went well into the morning with a packed and lively crowd.

A beat was not to be missed along the strip as bars and restaurants kept ‘limers’ sufficiently entertained with great music from live bands and sound systems.
The after race action continued on Sunday night with DJ Supa Dymond, Rico and the Four Play band and The Spirited Band.