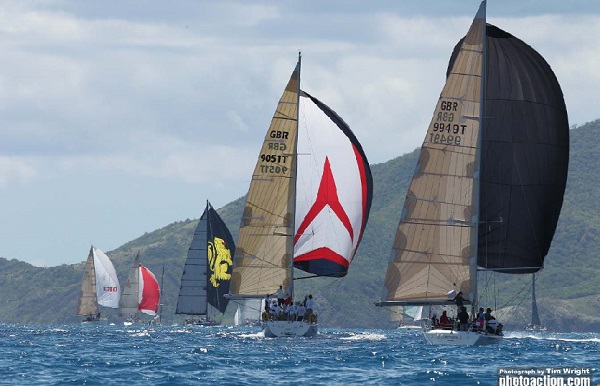 Beautiful sunshine, crystal clear blue skies and a gentle breeze produce a positive vibration for the first day of racing at Antigua Sailing Week. Winners are always grinners but as sailors came ashore, after three hours of racing in paradise, there were smiles all round.

In CSA 1, HM King Harald of Norway took Line Honours in today’s race but after time correction, the winner was Jorge Bellina Lishner’s Peruvian Soto 48, Kuankun. Kuankun was built in Argentina in 2011, but the crew are nearly all from Lima, Peru and the yacht is making its debut at Antigua Sailing Week. Skipper, Jorge Bellina Lishner was delighted to win today’s race. “This is the first time I have been to Antigua and it is such a beautiful place to sail, fantastic conditions with wonderful scenery and we will definitely be celebrating our win tonight in style. Everybody was so friendly, cheering us at today’s prize giving, we will definitely be enjoying an English Harbour Rum on the rocks before our crew dinner tonight.”

The closest finish of the day was in CSA 3, with the top three yachts just 32 seconds apart in a race lasting over three hours. Phil Lotz’s American Swan 42, Arethusa got the upper hand on the beat up to Willoughby Bay to lead by nearly ten minutes but Richard Wesslund’s American J/120 El Ocaso staged a fantastic comeback downwind to catch Arethusa and pass her to cross the line nearly 15 minutes ahead. However, it was not quite enough after time correction was applied. Arethusa took the win by just 18 seconds from archrival El Ocaso. Trinidad’s Peake Yacht Services Slippery was very much in the hunt, just eight seconds behind El Ocaso to claim third. 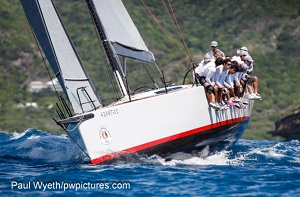 “The beat up to Willoughby Bay was all about getting to the shore and out of the foul current and taking the lifts off the land. At times we were so close to the rocks we could almost touch them but it definitely paid off for most of the early part of the beat but unusually the wind went forward when we were off Falmouth Harbour and we had to duck behind a lot of boats. We went offshore for clear air and that paid, as when we tacked back we got in front of the whole fleet bar Quokka. Downwind we used our symmetrical kite whilst the opposition sailed the angles with an asymmetrical and I believe we got the choice right and that was a big part of today’s win. All round today was a great tactical race on a well thought-out race course.”

Today Race Committee Boat B organised racing in one of Antigua’s most beautiful locations. Rendezvous Bay was a magnificent sight with over half of the yachts racing at Antigua Sailing Week enjoying a tight course close to some of the most beautiful beaches in Antigua. In CSA 6, Geoffrey Pidduck’s Biwi Magic got caught in traffic at the start but pulled away well to take Line Honours and the win on corrected time. CSA 7 and CSA 8 had a combined start. Jorge Born’s Batucada was the clear winner in CSA 7 and in CSA 8, Sir Hugh Bailey started in style, steering his new yacht Ugo to victory. Sandy Mair’s Cricket was second with Jim Ryan’s Voilactus taking third. Jim Ryan and his crew are from New York and are racing at Antigua Sailing Week having won the Antigua and Barbuda Hamptons Challenge. You can find out all about the Jim Ryan and his team in today’s video on ASWTV.

Nelson’s Dockyard will be the venue for tonight’s Sunset Party with Spirited Band and Rico & the 4 Play Band playing live with by DJ Supa Dymond spinning tunes into the night.

For full results and more: www.sailingweek.com