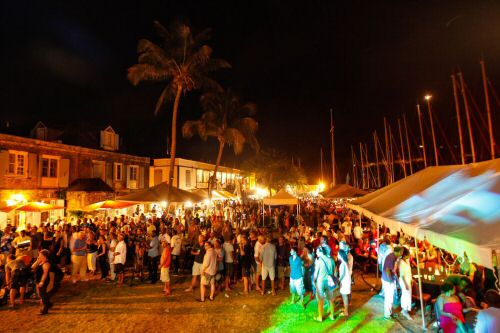 Yet another edition of Antigua Sailing Week has been logged in the books.

The thrill and excitement of competitive racing will certainly be framed into fun memories as much as the camaraderie and friendships that were fostered when the sun set and the landside fun kicked in.

The English Harbour nightlife provided an entertaining blend of activities for sailors who never had to travel too far to unwind after competition on the seas. 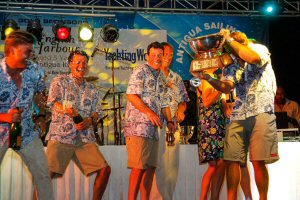 Prize giving night gave the deserving sailors their shining moment after glorious achievements in negotiating courses and coming out ahead of very stiff competition.

With the formalities of handing out trophies and awards over, the stage was left open for the night’s entertainment to bring the curtains down on the 46th installation of Antigua Sailing Week.

The evening was already festive, as the sailors began pouring onto dockside of the Nelson’s Dockyard to be met with delightfully tasting dishes made possible by the usual Friday night experience of the Copper and Lumber Store Hotel’s Seafood Friday.
Captains and their crews spread across the lawn seated around tables sharing in the good time and soaking up every bit of the fun memories that were once again offered up on this last stop of a busy calendar for the yachting season.

DJ Nez played some wonderful hits earlier and then the band, 1761, named after the nautical coordinates of Antigua, set a course for a fun trip musically for the rest of the night.

Committee members and volunteers for the first time in weeks were able to relax and let loose following many hours of preparation in making sure that Antigua Sailing Week goes by without hitch.

Alison Sly Adams, who heads the marketing, shoreside organization and sponsorship team, was in full praise of team members, support agencies, sponsors and volunteers for bringing positive energy to the event.

“A huge thank you to Tracy Guerrero of Indigo Event Services for the coordination of the week long Antigua Sailing Week events. It involves a huge cast of people, many in the background who work tirelessly throughout the week to ensure our visitors experience is as good off the water as on. Aside from our SWAT Team the Royal Police Force of Antigua and Barbuda, the Defence Force, the Coast Guard, Emergency Services, ABSAR and Guardian Security have worked throughout the week to ensure that participants and partygoers are safe. We would like to say a big thank you to them as well as to our host venues the Antigua Yacht Club, Cloggy’s and the entire National Parks Team headed up by commissioner Ann Marie Martin who have all provided us with such fantastic backdrops to a fabulous week.”

She went on to say “ During the evening and on Saturday morning we received feedback from many boats that the Final Awards Party was the best they had ever attended, not just at Antigua Sailing Week, but anywhere in the Caribbean.”

While some sailors headed off for a deserved rest, the night was just beginning for others. By this time the English Harbour strip was incredibly busy. The Wadadli Grill, a mix of local food vendors, was a must stop for a late night bite before the next big stop on this last night of Antigua Sailing Week.

Hundreds poured into Abracadaba, the popular English Harbour Nightclub, for the official after party called Nautical. The dancing never stopped until well into the morning.

Dockyard Day, a festive and cultural activity, hosted by the National Parks Authority to bring the yachting season to its close was held on Saturday, climaxed by a live performance by Laurena Davis and the TKO Band. Another busy night in the Dockyard and a resounding end to Antigua Sailing Week 2013.

Check out the photo gallery of the awards and parties here:
https://www.sailingweek.com/v3/photogalleries.php?gallery=184#content