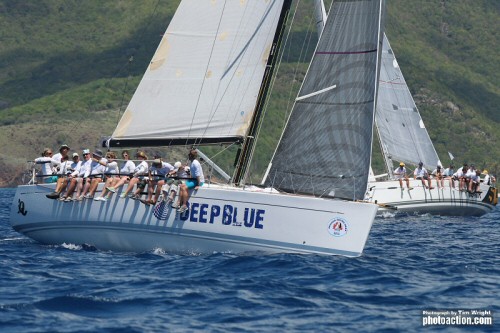 You could almost feel the tension on the dock as the international fleet sailed out to the combat area. With many class winners yet to be decided, the pressure was heightened by tricky conditions. The breeze was rarely more than 10 knots and there were huge wind holes appearing all over the racing area. However, the Race Committee did an excellent job getting in a fair race for all classes. Starts are always important, especially in light airs and several yachts could not control their urgency enough, resulting in several individual recalls and two general recalls. The last day of racing at Antigua Sailing Week was not for the faint hearted.

In CSA 1, Eduardo Wong Lu Vega’s Soto 48, Kuankun scored its sixth win of the series. Time and time again the Peruvian boat has been launched off the start line and into clear air. It was a great day for Simonas Steponavicius’ Volvo 60, Ambersail. The Lithuanian team used its enormous Code Zero sail to great effect to take second place and celebrated in style with several crew somersaulting off the back of the boat for a refreshing swim. Derek Saunders’ British Farr 60, Venomous got the best start of the day and sailed well to take third. In CSA 2, Christian Potthoff-Sewing’s German JV53, Auliana scored her third win in a row to win the class title, X-612 Nix was second overall and Hector Velarde’s NM92, Locura was third.

In CSA 3, Phil Lotz’s American Swan 42, Arethusa finished the regatta in style by winning the last race and also winning the class title. Richard Wesslund’s El Ocaso struggled in the light airs and could only come sixth today but the team from Florida finished second for the series. It went to the wire for the last podium spot. Antigua’s National Sailing Academy sailors lost out by an agonising 32 seconds to Peter Peake’s Trinidadian RP37, Slippery for third in class.

“Absolutely thrilled and delighted for the team,” grinned Philippe, after crossing the line. “That is definitely the most competitive regatta that we have sailed this season and my heart was pounding when our start was affected by an individual recall. It could have easily been a very bad moment. All credit to Southern Child and Lancelot II, they both sailed extremely well and put a lot of pressure on us creating some fantastic racing.”

In CSA 5, Carlo Falcone’s Caccia alla Volpe got a dream start at the pin end of the line and sailed into clean air and sped away from the fleet. Ross Applebey’s Scarlet Oyster tried in vain to catch its rivals but being a far heavier boat, it was impossible unless Carlo’s team made a mistake. Caccia alla Volpe sailed a near perfect race to take the gun and the class title.

“Right to the wire,” smiled Carlo Falcone shortly after crossing the finish line. “That was the closest match I have had for many, many years. We had to sail perfectly to beat Scarlet Oyster, who put up an incredible fight. I am sure both crews will meet up at the prize giving and share our story together. It was a hard fought battle and I have great respect for the Scarlet Oyster crew.”

Geoffrey Pidduck claims he is going to retire soon – if he does it will be on a high. At 75 years of age, Pidduck is the oldest helmsman at Antigua Sailing Week and his years of experience and zest for racing produced a perfect scoreline of seven straight wins in CSA 6 for the Antiguan Six Metre, Biwi Magic. “I have been competing at Antigua Sailing Week since the 1970s and I have never had a perfect scoreline. They say you should go out on a high but my wife says I shouldn’t give up, so we will see.”

Geoffrey Pidduck made a remarkable achievement at Antigua Sailing Week but he was not alone. Sir Hugh Bailey’s Antiguan CS 40, U-Go emulated Biwi Magic’s scoreline to win CSA 7B with a perfect seven bullets. In CSA 7A, Jorge Born’s Uruguayan Jeanneau 57, Batucada won the last race of the series to take the class title with Alain Charlot’s French Beneteau 473, Ormeau in second place and Phil Munday’s British Jeanneau 52.2, Great Escape of Southampton in third.

In Bareboat 1, Alfred Geisser’s Swiss KH+P Sea You Later wrapped up the title with a day to spare. Thomas Priebus’ German Cayenne won the last race of the series to win a close battle for second place with Paul Solomon’s Where The Wild Things Are taking third in class. There was a dramatic conclusion in Bareboat 2, with Coleman Garvey’s Irish Warvor and Christoph Nielsen’s German KH+P Bageal match racing in the final race in a struggle to win the class. Warvor beat KH+P Bageal to the line but failed to put a boat between themselves and their rivals. KH+P Bageal and Warvor were equal on points but KH+P Bageal was awarded the class win by virtue of a greater number of first places. KH+P Balaou skippered by Alexander Pfeiffer was third.

Whilst the Class winners at Antigua Sailing Week deserve high praise, not everyone gets to taste victory but the smiles on the dockside after today’s final race were testament to a highly successful regatta. Global Yacht Racing’s Andy Middleton’s sailing First 47.7, Team Shambles was fifth in a highly competitive class. Charter skipper Alistair Goodwin was celebrating his 50th birthday with friends and family. “We have had a fantastic time and this has been a very memorable way to celebrate. Andy has really looked after us so well and this has been a really welcoming regatta.”

Global Yacht Racing also has a little bet with fellow competitor, Swan 51 Northern Child, which involves wearing a dress at the prize giving. “Northern Child had the better of us most of the season but tonight I fully expect their skipper Christian and First Mate Tim to be correctly attired. I am sure Christian will slip into one of his wife’s dresses but Tim is a big lad and he will need to find something for the fuller figure!” laughed Andy Middleton.

Hundreds of competitors are expected to attend tonight’s Final Awards Party, where prizes will be awarded including the prize for the best yacht at the regatta, The Lord Nelson Trophy. There are a number of boat names being whispered around the docks but the winner of Antigua Sailing Week’s most prestigious prize is very much undecided. After the prize giving, 1761° will be play a live set of rock anthems to get the party started and DJ Nez will be spinning dance tunes grooving into the night.