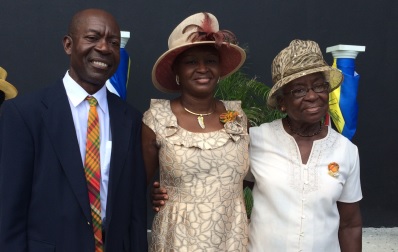 Stedroy Franklyn Braithwaite at yesterday’s awards with his wife and mother.

We are delighted to announce that Stedroy Franklyn Braithwaite, Director of Antigua Sailing Week, Regatta participant and the man behind A & F Sails’ superb sail making and repair work during the Regatta and throughout the year, has been named Grand Officer Most Precious Order of Princely Heritage (GOH) for distinguished contribution to sailing and community development in the 2014 Independence Honours list.

In his very understated and humble manner, the sailor who is usually found as part of the crew of one famous sailing boat or another, said when we called to congratulate him:  ‘ I was surprised’.  Franklyn is a great role model for Antiguan youths aspiring to become involved in the yachting industry.

The ceremony took place yesterday at the Sir Vivian Richards Cricket Stadium following the Independence National Ceremonial Parade. We are delighted to see Franklyn being honoured for all of the great work he has done and continues to do for the community and for the development of the sport of sailing and the yachting industry in Antigua.

Congratulations Franklyn from everyone at Antigua Sailing Week.