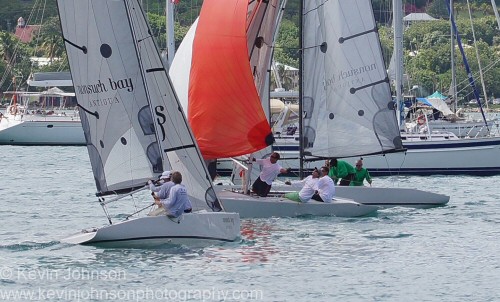 Nelson’s Dockyard was packed to the rafters on Tuesday evening with The Big Party Night – SPLASH. DJ Woogie and DJ Private Ryan were spinning sounds to thousands of revellers late into the night with special guests Tian Winter and the iConic Band playing live on the Antigua Sailing Week main stage. No doubt there were a few sore heads the next day but with no class racing scheduled for Antigua Sailing Week, hundreds of people made their way to Pigeon Beach to watch the Nonsuch Bay RS Elite Challenge. 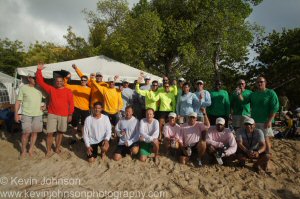 Eight top skippers took part in the fleet racing event with the victor winning a week at Nonsuch Bay Resort, one of the most luxurious beach resorts in the Caribbean. Sales and Marketing Director at Nonsuch Bay Resort, Mark Whinney, was thrilled to stage the event. “Watching the RS Elites racing right off the beach was fantastic. The racing was a real spectacle and it was great to see such a big crowd appreciating the skills of the competitors. I would also like to thank Antigua Sailing Week for the opportunity to join in what has been a fantastic week.”

The four skippers to make the final were: Mark Dicker, Al Ashford, Ross Applebey and Marc Fitzgerald. After some intense racing, Mark Dicker, skipper of RP78, Whisper, showed a clean pair of heels in a fantastic final to win all three races. His crew included Irish Olympic Finn sailor, Tim Goodbody. All four skippers received mementos of the event, including a bottle of 5 Year Old English Harbour Rum.

During the day, Nonsuch Bay Resort’s award winning chef Mitchell Husbands showed why he was voted Caribbean Chef of the Year. “We have kept the menu simple. That is what a beach party menu requires but my Jamaican sous-chef makes a fantastic jerk seasoning and you have just got to taste that,” laughed Mitchell. The fine fayre was enhanced by a Veuve Clicquot Champagne Bar and there was plenty of Carib Beer for those with alternative tastes! 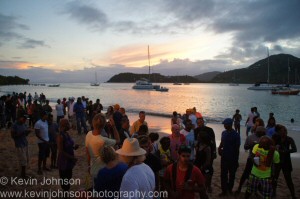 The beach party continued with a host of fun-filled activities including beach-cricket, tug of war and after a rain squall provided a refreshing down pour, a wet t-shirt competition! DJ Purist provided the tunes well past sunset with excellent acoustics supplied by Townhouse Megastore and Lava Sound. Racing continues today with the fourth and penultimate day of racing at Antigua Sailing Week.