Get Ready To Rumble 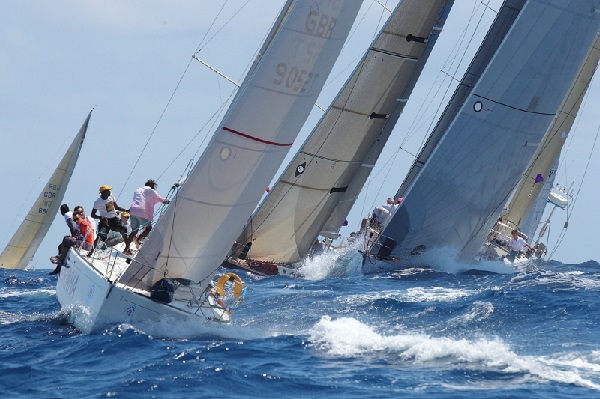 Antigua Sailing Week kicks off on Sunday with an entry list slightly up on last year of 106 yachts.

It features seven days of superb racing from the Guadeloupe to Antigua Race on Friday 25th April to the final awards ceremony on Friday 2nd May. There are over 100 entries for the main event which is the last big regatta of the Caribbean season. Yachts from an astonishing 21 different countries will be taking part from all over the Caribbean, Europe, North and South America, Scandinavia, Russia, Eastern Europe and even Australia.

Prior to the regatta, the Guadeloupe Race and the Yachting World Round Antigua Race stand alone as one off races with their own prestigious awards. The Guadeloupe Race has been running for as long as Antigua Sailing Week and this year has attracted 20 entries including Rob Date’s RP52, Scarlet Runner. “Scarlet has sailed all the way here from Melbourne, Australia, about 18,000 miles in total,” commented Rob. “Four of the crew have done the whole trip. This is the first time I have been to Antigua Sailing Week and we are really looking forward to some top competition. The Guadeloupe Race and the Round Antigua Race will be a good shake out for us for the regatta.”

Forty-five yachts have entered the Yachting World Round Antigua Race and there should be a fascinating encounter between two canting keel carbon flyers. Mike Slade’s Farr 100, ICAP Leopard, and Andy Budgen’s Volvo 70, Monster Project are both capable of beating the race record, currently held by Sir Peter Harrison’s Farr-designed 115-foot, Sojana, which completed the race in 4 hours, 37 minutes and 43 seconds in 2009. Sojana is undergoing a major refit and will not be racing this year.

Mike Slade, owner of ICAP Leopard has been coming to Antigua Sailing Week for many years. “Leopard has been very busy this season with charter guests and I thought it was high time I got to have some fun with her,” laughed Mike. “Antigua is like a second home to Leopard and we have many friends here – some already in Antigua and some flying in from abroad. Leopard broke the Round the Isle of Wight record last year and there are a lot of similarities with the Yachting World Round Antigua Race but it will be all about the weather on the day.”

On Wednesday 23 April, 106 yachts had entered Antigua Sailing Week including 75 yachts racing under the CSA Rating Rule, 28 bareboats and 3 multihulls. Classes are yet to be finalised but it seems likely that ICAP Leopard and Monster Project will have an epic duel. ICAP Leopard will be giving Monster Project about six minutes an hour for their handicap.

A large number of performance surfing machines will be screeching around the courses. Piet Vroon’s Dutch Ker 46, Tonnerre de Breskens 3 has been in fine form this season and is likely to face stiff competition from Scarlet Runner, Spanish TP52, Balearia, Leo van den Thillart’s Kernan 47, True and Jan Olesen’s Danish team on Essex Girl. The surfing is sure to continue with a number of pocket rockets entered.  Lewis Fitzgerald will skipper the Antigua National Sailing Academy Cork 1720, Digicel Spirit, going up against father Marc Fitzgerald on another Cork 1720, Team Sojana.  Ian Hope Ross’ Melges 32 Kick ’em Jenny 2 is down from Sint Maarten, as is John Gifford’s Melges 24, Amcon Express.

No less than six Beneteau 40.7s will be battling it out: Ortac-Team Seeland, Cheeki Rafiki, Girls For Sail, Spirit of Venus, Visiooptic and Caipirinha. Of the displacement charter race boats, Scarlet Oyster, Northern Child, EH01, Southern Child and Lancelot II will have a friendly yet full on battle. EH01 has a crew of Canadians this year who have never been to the regatta before, but they enjoyed a few Wadadli beers on arrival and got in the swing of things! Richard Wesslund’s J/122, El Ocaso and Philippe Falle’s Deep Blue Racing team on Grand Soleil 43, Quokka, are sure to have a close encounter.

Twenty-eight bareboats are currently entered, mainly through regatta sponsor, Sunsail. The bareboat fleet is one of the most competitive fleet at Antigua Sailing Week.  Alfred Geisser’s KH+P Sea You Later was last year’s overall bareboat winner with Christoph Nielsen’s KH+P Bageal winner of Bareboat 2 and both yachts have returned this year to defend their respective titles.

For full details and much more go to: www.sailingweek.com.