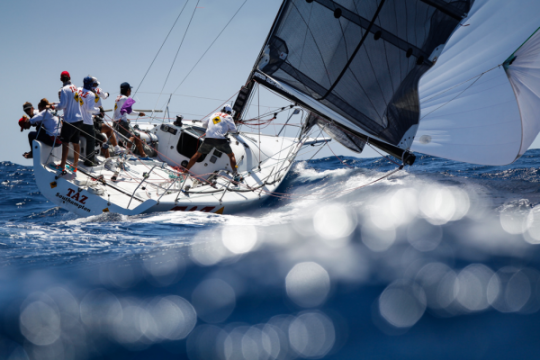 The second day of Antigua Sailing Week was blessed with cracking conditions with well over a thousand sailors returning to shore, grinning from ear to ear after a spectacular day on the water. The south-easterly breeze often softens the wind strength off Antigua but not this week. The warm Atlantic breeze blew in and whipped up as the wind bent around the cliffs and gorgeous bays giving a solid breeze of 15-20 knots.

Two races were run for all classes with the high performance yachts taking to the south-westerly race area off Rendezvous Bay. Racing on tight windward leeward courses, getting a good start into clear air and nailing the manoeuvres became even more important. The bareboat classes and CSA 6 to CSA 8 raced off Windward Beach beating past the dramatic cliffs east of English Harbour before turning downwind to ride the Caribbean surf.

There were no gaps for Antigua’s famous sailing dentist, Bernie Evan-Wong today in CSA 4. Racing his RP37, TAZ with both of his daughters, Bernie’s team bolted off the line to win the first race of the day – but only just. Ian Hope-Ross’ Melges 32, Kick ’em Jenny 2 was just 32 seconds behind after time correction. TAZ made it a perfect two bullets for Bernie by winning the last race of the day by 44 seconds from Kick ’em Jenny 2. Jim Hightower’s Texan team racing King 40, Hot Ticket, was third in both races.

“It has taken a bit of time with TAZ but we are finally getting our act together,” smiled Bernie Evan-Wong. “We haven’t had a bad start for a while and we got away really well in both races. Kick ’em Jenny goes really well downwind and the courses today did not have a big downwind element which suited us. However, with TAZ you just have to get everything right to get her going. I am sure we have a lot more potential but we are getting there.”

In CSA 2, Alan Edwards’ classic Swan 65, Spirit, increased its winning streak by taking the win in the first race. Jean-Paul Riviere’s magnificent Dolphin 100, Nomad IV, won the last race of the day with Spirit second. After three races, Spirit leads the class with Nomad IV second and the consistent Oyster 82, Starry Night of the Caribbean, in third.

“We are getting it together; we have only been racing Spirit for two years. Previously we thought we could out-point the opposition, but we have backed-off this pinching stuff and now we bear away a little for boat speed. We are also running very well downwind without a pole, pushing it out and letting it fly. Today it was amazing to score another win in the first race but the wind picked up in the second race and boy, did Nomad fly – wow! That extra bit of wind makes all the difference to Nomad. We hope the wind will stay around 15 knots. That will suit us but in more breeze it will be difficult to beat them.”

Sir Richard Matthews’ Grand Soleil 56, Shine also had a perfect two bullets today to take the lead in CSA 3. Daniel Figueirido’s Soto 53, Humildad Zero took line honours in both of today’s races. However, after time correction Shine won by over a minute in the two races. Humildad Zero placed second in both races and the Argentinian team is just a point behind Shine after three races. Yesterday’s race winner, Nigel Passmore’s J/133, Apollo 7 was third in both of today’s races.

‘The team has never sailed together before but we have put in some good preparation. We worked out positions for the crew and we found that we had a really balanced crew that jelled well. We did two hard days of training and a full day racing in the Pearns Point Round Antigua Race. Our upwind boat speed is very good and Matt is an excellent main sheet trimmer. Our speed off the line is a big factor. There are a lot of 40.7s in our class but by getting away, we get into clear air.”

In Bareboat 1, Alice Martin’s Team Painkiller racing Moorings 50.5, La Bete, has scored two victories and a second to lead the class by three points from Rupert Jessett’s Harmony 52, Monet 1. Eric Lynch’s Moorings 50.5, Triton sailed by the ‘Lynch Mob’ finished second in the last race of the day to move up to third. Two podium finishes for Michaelangelo Valluet’s Sun Odyssey 509, Xeres has put the team into fourth place.

Alice Martin’s Team Painkiller are all from Chicago where Alice is an accomplished match racer and races her Sydney 38, Painkiller 4.

“The name Painkiller actually comes from my last visit to Antigua over 10 years ago. I bought a boat with a name I didn’t like and we were drinking Painkillers up at Shirley Heights and that was that!” smiled Alice. “The team were all in favour of coming to Antigua and we haven’t been disappointed. The party atmosphere is just fabulous and out on the water we are so lucky to have Karl James sailing with us, giving excellent advice and local knowledge.”

Today’s racing was sponsored by Johnnie Walker. “For us it is very important to partner with such an amazing event and it is an honour for us to be part of Antigua Sailing Week,” said Victor Alvarez, Regional Sales Manager for Diageo, brand owner of Johnnie Walker for the Caribbean. “Johnnie Walker is one of the biggest brands and the number one Scotch in the world and we tend to be associated with big, prestigious events so why not one of the best known regattas in the sailing community, Antigua Sailing Week?”

Damian Lyder, Marketing Consultant for Kennedy’s Club commented about bringing the iconic reggae band, Steel Pulse to Antigua Sailing Week tomorrow night at Nelson’s Dockyard: “We are very excited to be hosting one of the main events at Antigua Sailing Week and many of the sailors here as well as residents and citizens of Antigua and Barbuda would have grown up listening to this music. It is going to be a very lavish event with a VIP area and good food, company and all the top brands of Johnnie Walker: Gold Reserve, Platinum and maybe we’ll sneak a little Johnnie Walker Blue inside there. We are really looking forward to it.”

Racing continues tomorrow with the third day of Antigua Sailing Week with two more races scheduled for all classes.

For full results go to: http://www.yachtscoring.com/event_results_cumulative.cfm?eid=1246 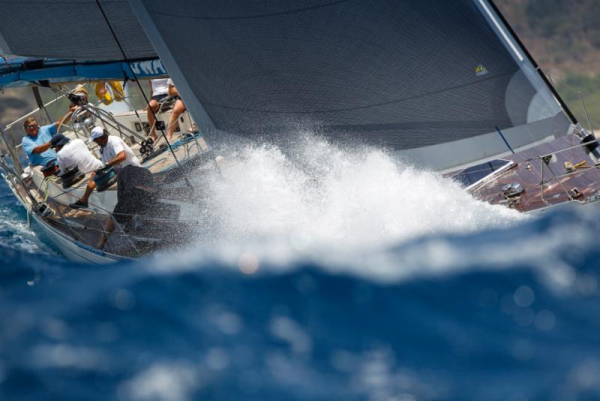 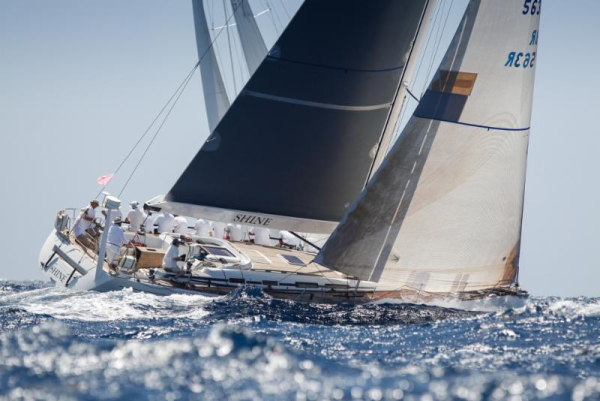 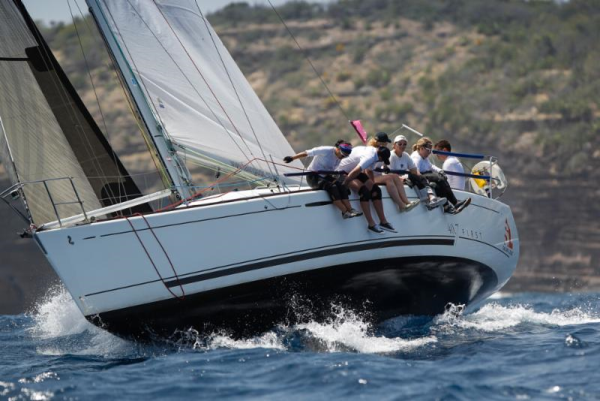 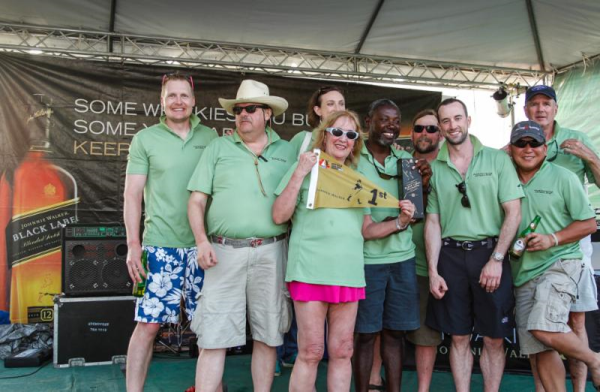 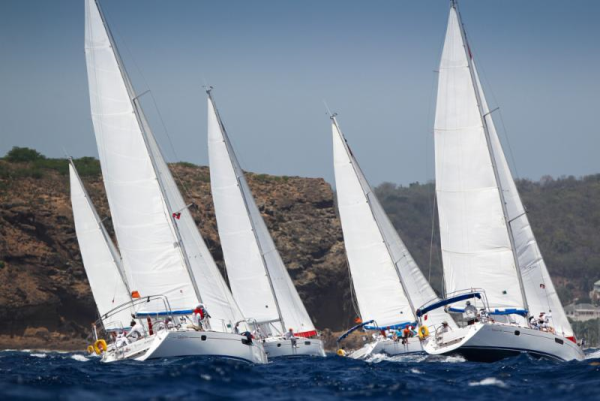