December 1, 2015 In As it Happens Press Releases 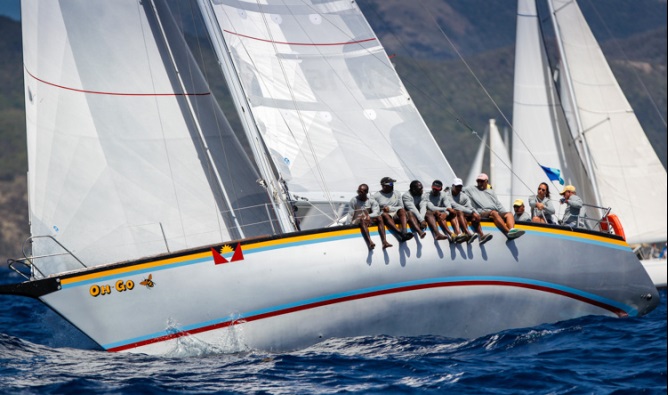 Winner of the 2015 Lord Nelson Trophy, Oh-Go, skippered by Jonty Layfield and raced under the name Sleeper

The 49th Antigua Sailing Week is now only five months away and regatta organisers are delighted to announce that two new race officers will be joining the team in 2016. Stuart Childerley will be joining as Principal Race Officer (‘PRO’) and Stephen Parry as Race Officer (‘RO’) on the Committee Boat B start line.

Stuart Childerley is an extremely accomplished sailor – he twice represented Great Britain in the Olympic Games in the Finn Class, finishing in 4th place on both occasions. A world class yachtsman, Stuart has won several National, European and World Championships in both dinghies and keelboats. Earlier this month he participated in the Etchells Worlds in Hong Kong with Mark Andrews and skipper Jeremy Thorpe where they finished in a very respectable 4th place. Stuart gives back to the sport in many ways and in addition to acting as race officer for events in the UK, Europe and the US, he also has a passion for coaching using his vast experience to assist many classes of competitors to focus on strategy, tactics and boat handling techniques.

Antigua Sailing Week 2016 will be Stuart’s first return to Antigua in several years. Of the opportunity to act as PRO for the event Stuart said: ‘I’m really looking forward to getting back to Antigua after many years’ absence. I’m enthusiastic about picking up with Antigua in its position as one of the top sailing venues in the world and working with an existing team to provide great racing.’

Stephen Parry has been a key player in the on-the-water race management team for Antigua Sailing Week for the past few years and ASW is delighted to announce that Stephen has agreed to take on the role of Committee Boat B Race Officer for 2016. Stephen has owned and raced a variety of boats with great success over many years. He has been an RYA National Race Officer for 10 years, running many events in Europe and the UK including acting as PRO for the Dartmouth Royal Regatta, CRO for the ‘Big Boats Championships’ in the Hamble Winter Series and acting as Assistant Race Officer at the Paralympic Games in 2012. Stephen is also RYA’s Regional Race Management Co-ordinator organising and running courses for race officers and mark layers.

Of the opportunity to take on the Race Officer role, Stephen said: ‘It is a great pleasure to have been asked to be an RO for Antigua Sailing Week. My wife Angela and I are really looking forward to being part of the great team that organises and runs the regatta. Having been involved as a sailor and on both Committee Boat race management teams over the last few years I have a flavour for the traditions and expectations of the event. I am looking forward to working with Stuart to provide a challenging yet fun week of yachting for the competitors.’

The Notice of Race for Antigua Sailing Week 2016 is now available and 31 boats have already entered. Discounted entry fees are being offered to all participants who enter early and pay their entry fees in full. The Notice of Race for the optional Guadeloupe to Antigua Race and the Round Antigua Race will be available in the near future. When entering online, don’t miss the opportunity to enter all three events at one time.