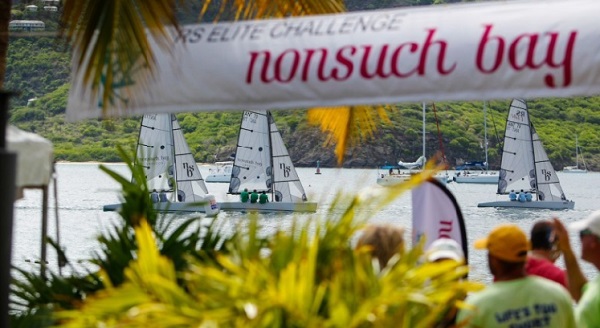 Nonsuch Bay Resort hosted the Final of the RS Elite Summer Series on Sunday 23rd March. Five crews raced in the final stage of qualification for the Nonsuch Bay RS Elite Challenge held on Lay Day at Antigua Sailing Week. Nonsuch Bay is excited to announce the winners of the Summer Series Final – Al Ashford and team were the winners of the final series and Patmore Watson and his team finished in second place. Both teams will move on to participate alongside six other international teams in the RS Elite Challenge to be held on Lay Day during Antigua Sailing Week – Wednesday, April 30. Come on down to Pigeon Beach and cheer on your favourite team!

The Nonsuch Bay RS Elite Challenge was first held on Lay Day last year. This one-day invitational one-design “stadium event” sees eight of the best skippers and crew at Sailing Week racing on level terms. The courses are set just of Pigeon Beach offering the Lay Day beach party a close up view of back to back short course racing with live commentary. Last year’s event was won by Mark Dicker (Mini Maxi World Champion and Skipper of RP78 Whisper), and including crew Tim Goodbody (Olympic Finn Sailor) and Christian Jensen (Elite bowman). Two of the eight entries for the Challenge are reserved for local Antiguan crews and this year’s local entries will be decided at the Summer Series Final this weekend.

The RS Elite Summer Series is held at Nonsuch Bay on appointed Sundays during May to August. Places are open to local crews and the race fee includes lunch at The Bay @ Nonsuch. The series offers crews and spectators entertaining and very competitive one-design racing in the outstanding sailing conditions inside the reef at Nonsuch Bay. While the racing is relaxed and friendly, many of the participants have an eye on a greater prize as this series is the first step to qualification for the two places reserved for Antiguan crews in the Lay Day RS Elite Challenge. Crews with the best results over the summer series are invited to participate in this weekend’s Final.