Ready for Take Off! 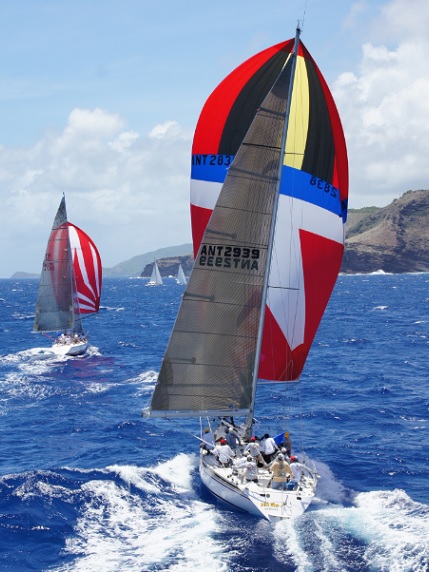 It’s buzzing in Antigua as Falmouth Harbour and Nelson’s Dockyard are filling up fast with racing yachts from all over the world. Antigua Sailing Week’s racing programme kicks off with the Guadeloupe to Antigua Race this Friday, followed by the Yachting World Round Antigua Race on Saturday. Racing at the 46th Antigua Sailing Week will commence on Sunday, April 28.

Current weather forecasts are predicting winds of around 15 knots all week with a significant sea state providing some big waves to surf down in the sunshine. Lighter winds than last week are due to the Azores high being squeezed south by a low-pressure system centred over Iceland. However, the low-pressure system may move during the week and this could bring a change in the weather. Class splits have now been confirmed, here is a run down on some of the runners and riders.

The big race boats will be making a splash at Antigua Sailing Week, however Peter Harrison’s mighty Farr 115, Sojana is undergoing repairs but the team will be racing RP78, Whisper for the regatta. Simonas Steponavièius Lithuanian team racing Volvo 60, Ambersail could be in contention but Ambersail will be sure to have a great battle with another Volvo 60, Cuba Libre sailing under the Austrian flag. Christian Potthoff-Sewing’s German Judel & Vrolijk 53, Auliana II is making her Antigua Sailing Week debut.

Hector Velarde’s Peruvian NM92, Locura is one of the largest yachts but by no means the quickest. Jose Arozamena’s American Farr 73, Maximizer will be difficult to catch but former Antigua Sailing Week winner, British CNB 90, Bristolian owned by Patrick Wynn with Antiguan expert, John Burnie as crew boss, could well be the boat to watch. Venezuelan Oyster 82, Starry Night of the Caribbean will be impeccably sailed.

This year Antigua Sailing week features a variety of fast surfing bowsprit boats. Philip Lotz’s American Swan 42, Arethusa is a proven race winner. However Arethusa might struggle to keep up with some of the smaller rocket ships including Ian Hope-Ross’ Melges 32, Kick ’em Jenny 2 from St. Maarten and the National Sailing Academy’s turboed Cork 1720, Digicel Challenger. RP37 Peake Yacht Services Slippery from Trinidad could also be one to watch. However, Richard Wesslund’s J/120, Florida-based El Ocaso cleaned up at Antigua Sailing Week last time out and will be a favourite for class honours.

Twelve similar performance cruisers are grouped together. Lucy Reynolds’ British First 40, Southern Child has had a great season and should have a close tussle with British sister ship, Lancelot II skippered by Chris Jackson. Five First 40.7s will have their own private sparring match including: Sea Gal, Spirit of Athena, Coyote, Caipirinha and Visiooptik. Also Jonty Layfield’s British J/39 Sleeper may well feature after time correction.

With over a dozen displacement cruisers 51ft or under, you could call the selection the battle of the light heavyweights. Antiguan resident, Carlo Falcone will be racing Caccia alla Volpe but Christian Reynolds’ British Swan 51, Northern Child will be a force upwind in waves. Several other elegant Swans will be trading places on the race track, including Shane & Basil Diethelm’s Australian Swan 48, Sumatra, Valerio Bardi’s well-travelled Italian Swan 46, Milanto and Swan 44, Selene skippered by Adrian Lower, Commodore of the Royal Burnham Yacht Club. Philippe Falle’s Deep Blue Racing Team on Quokka should feature – the British Grand Soleil 43 is a weapon in light airs. Karl James, head coach of Antigua’s National Sailing Academy has selected Cliff Andrews to join the Quokka crew. Without doubt the favourite in the displacement light heavyweights is Ross Applebey’s British Oyster 48, Scarlet Oyster. Ross will be sailing with the same crew as last year, all from Guernsey in The Channel Islands.

Antigua Sailing Week is a truly international event with yachts coming to Antigua from all over the world and is also an occasion when Caribbean yachts race each other to settle the season’s bragging rights. Thomas Mullen’s USVI J95, Shamrock VII has had an excellent season and is sure to have a great battle with a clutch of Antiguan boats including Stephen Carson’s Dehler 34, Hightide, Geoffrey Pidduck’s converted six metre, Biwi Magic, Tanner and Shari Jones’ J/30 Blue Peter, Sandy Mair’s Beneteau 35, Cricket  and Rick Gormley’s Beneteau 38, Elethea.

If you are coming to Antigua Sailing Week, you are going to have the time of your life. For those who can only stay tuned, there will be daily reports, pictures and videos of the racing action and the parties on the official website and on Facebook and Twitter. For more information including a full list of well over 100 entries go to:  www.sailingweek.com.