September 27, 2019 In As it Happens Uncategorized 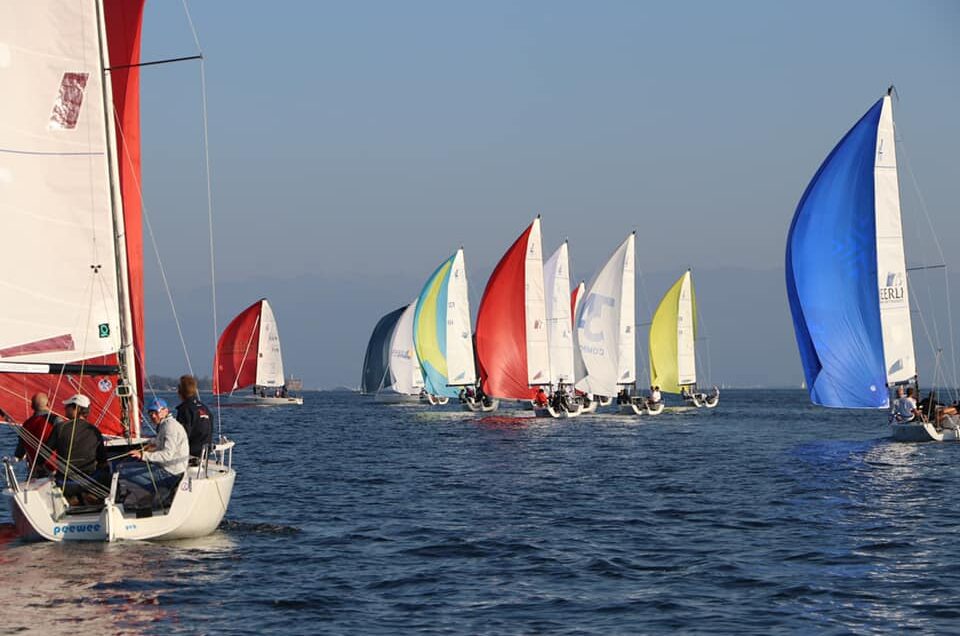 On the weekend of September 21- 22 at the Württembergischer Yacht Club (WYC) Friedrichshafen Germany, twenty-five J70 class teams from Switzerland, Austria and Berlin competed for glory. First in the Antigua Barbuda Trophy Challenge sponsored by Antigua Tourism Authority and then in the final race of the Lake Constance Battle Vol.4  sponsored by the organizers of the 2019 Interboot.

Even though the wind was only enough for two races as the summary report of the weekend indicates,  it was rather  competitive as everyone was hopeful to take home the grand prize of flights, Dream Yacht Charter bareboat and entry fees during Antigua Sailing Week 2020. 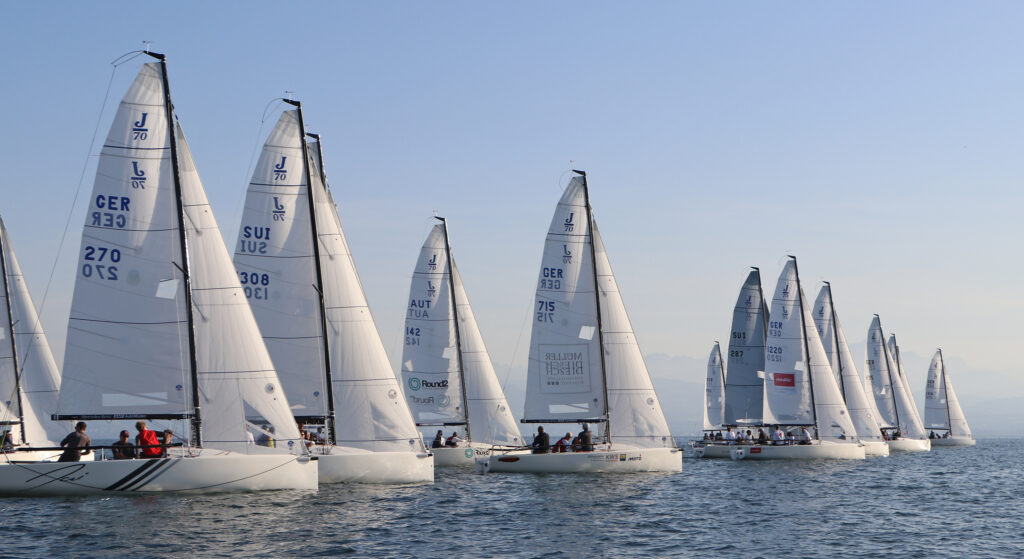 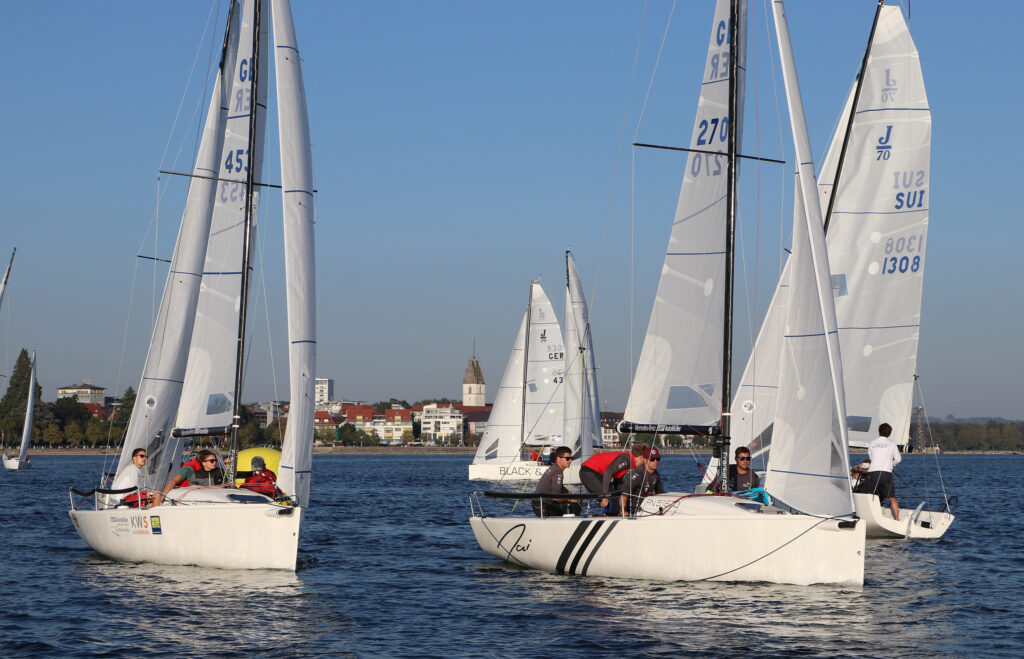 For a long time, the sailors had to wait for the wind under cloudless skies on Saturday. Although there was a storm across the bay from Friedrichshafen, it was not enough for a regatta fleet with 25 boats. Race director Conrad Rebholz sent the fleet onto the lake only after 4 pm and started a race in a westerly wind. In the first attempt almost half of the fleet had sailed too early over the starting line. Rebholz repeated the start – and it worked flawlessly. At the first windward mark already Markus Wieser led just ahead of the Swiss René Ott (RC Bodensee) and Max Rieger (WYC). After returning home, the Swiss team was ahead of the leeward mark – and on the second rounding of the windward mark, the Rieger crew was on the “Mothership”. Max and Moritz Rieger, Klaus Diesch and Thomas Stemmer did not allow this lead on the downwind tour and sailed to first, followed by the Swiss and the Wieser crew. “We got the turnpoints optimally. Klausi has announced that perfectly “, says helmsman Max Rieger. 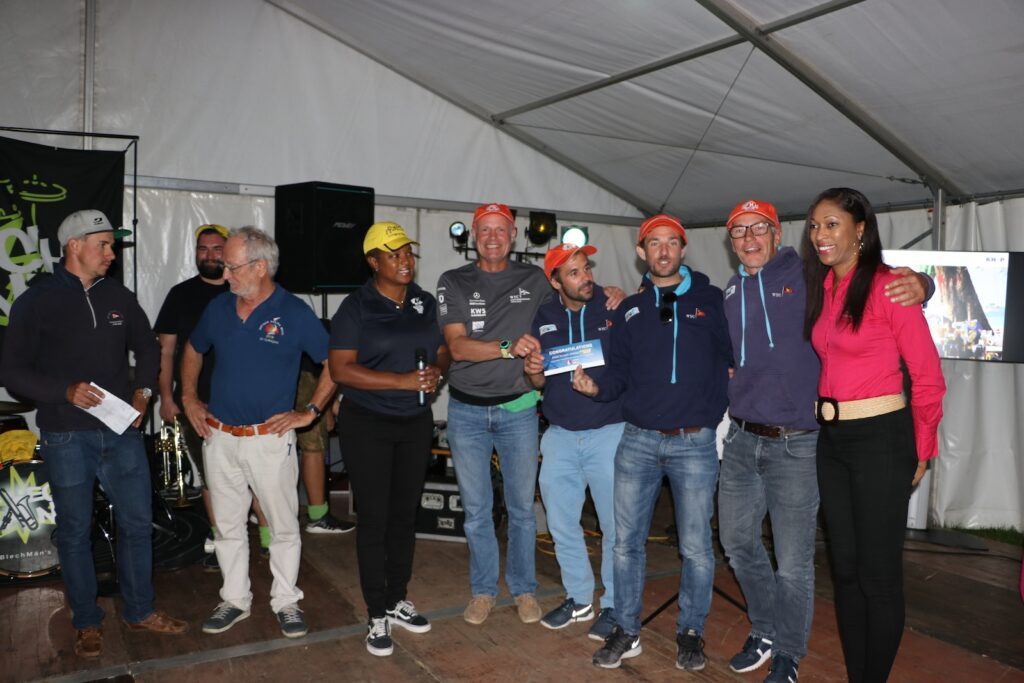 As the wind was not enough for a second race on Saturday evening despite the wait, Max Rieger and his crew were the winners of the day – and thus the winners of the Antigua and Barbuda Challenge.  Their reward, a trip to Antigua Sailing Week at the end of April 2020.  During the award ceremony conducted in the packed clubhouse marquee Klaus Diesch, team manager for the league promised “We’ll share that with the Bundesliga team at WYC.” 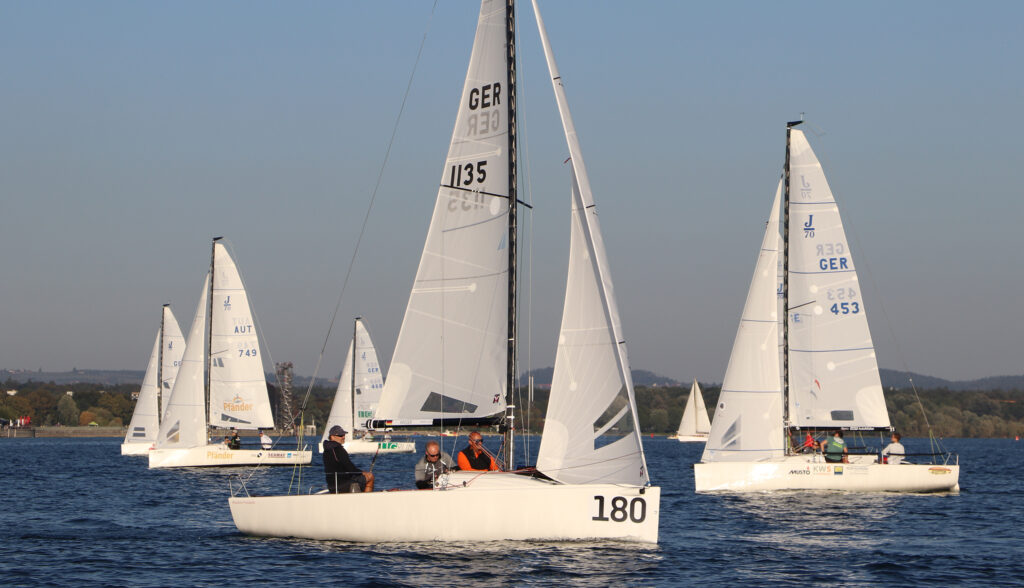 At 9:30 am on Sunday morning, Rebholz had set the starting time – and in fact there was also the hip northeast with six knots (two winds). “It was a disciplined start,” said Rebholz contentedly. “But much later we would not have been able to start,” continued the race director. For in the course of the race, the wind was already weaker, had already fallen below four knots at the finish. Wieser was first in the finish this time, ahead of Jens Ahlgrimm (Stuttgarter SC) and the Mehlig crew. At first, the wind was still waiting on the lake, later in the harbor – but shortly after 2:00 pm Rebholz broke off the wait. “The weekend was exactly between the winds”, he summarized in view of the fair winds before and the bad weather after the regatta. “Of course it’s a shame that we could not sail a third race, because the Interboot Trophy with only two runs is not part of the annual classification of the J70-Bodensee championship. But if there is no wind, there is no wind. 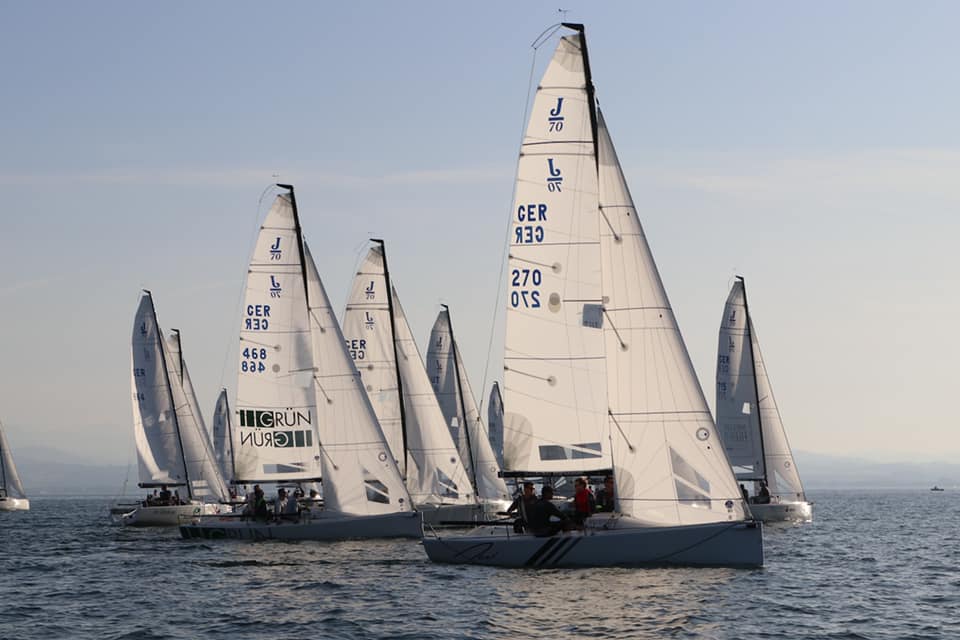 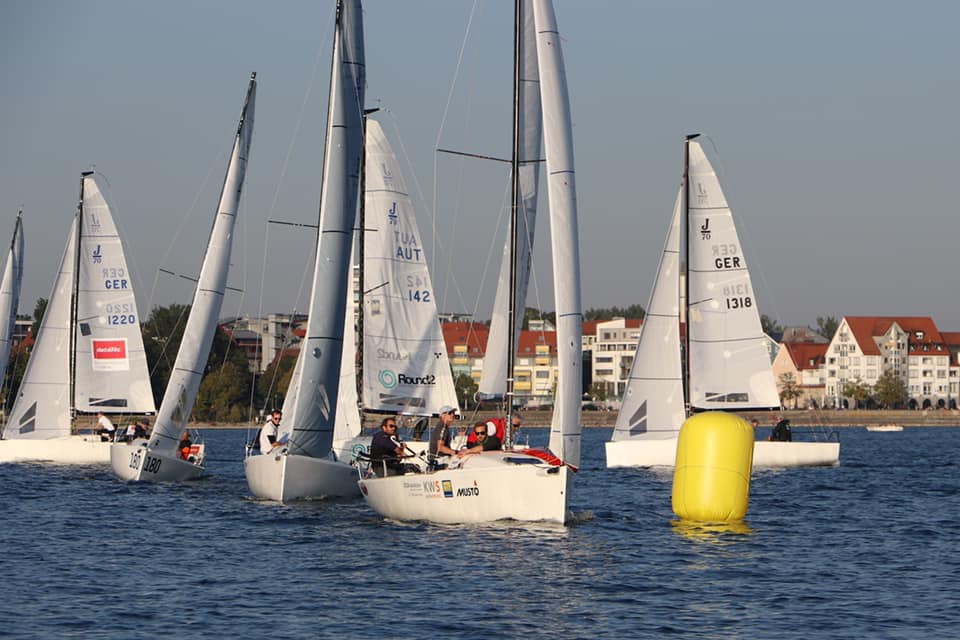 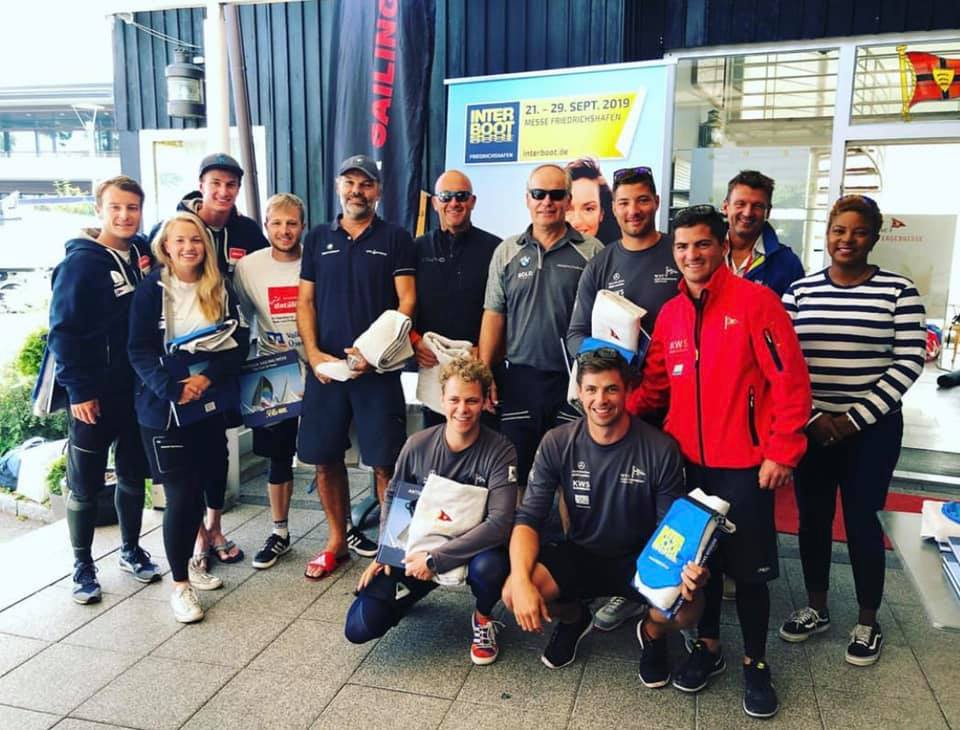 Therefore, after the two races, the winner of the fourth stage of the “Lake Constance Battle” was the J70-class Markus Wieser. The sailors from the Bavarian Yacht Club (BYC), based in Berlin and Munich, and his team (Wolfgang Käfer and Thomas Auracher) were clearly in the lead with just four points.  Second place went to the team of Frederik Schaal from SMC Überlingen (with Jan Frederik Fritze, Carlotta Fritz and Aaron Scheer) in front of the tied teams of Dennis Mehlig (WYC, with Kevin Mehlig, Yannick Hafner and Lukas Ammon) in third place and Veit Hemmeter (BYC, with Julian Stückl, Elias Rothe and Julius Ossner). Best Austrian was Klaus Diem from Bregenz SC (with Maria and Elias Diem and Martin Jäger) in fifth place. Sixth was the crew of Max Rieger (WYC), the best Swiss (Thomas Studer, CV Neuchatel) sailed to seventh.

Complete results lists can be found under www.wyc-fn.de under Interboot-Trophy.

A  further Battle is still pending for the Lake Constance Championship of the J70 class October 5th & 6th in Überlingen.