The World of Sailing Comes to Antigua Sailing Week 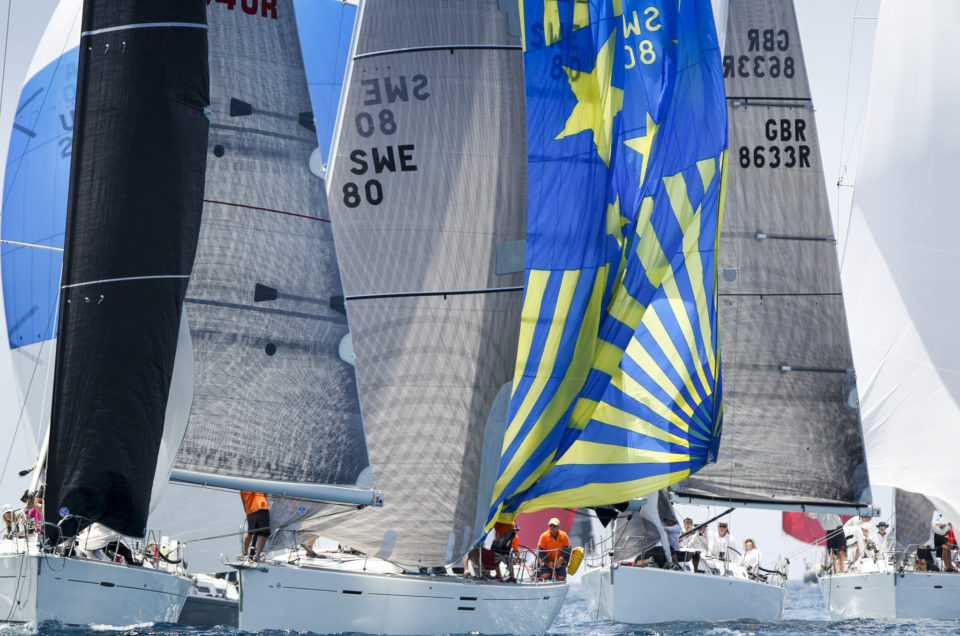 ST. JOHN’S, Antigua, April 26, 2017 –A staggering number of sailors from around the world are descending on the Caribbean island of Antigua to celebrate the 50th edition of Antigua Sailing Week. Over 150 teams racing on a huge variety of yachts will make this year’s event the biggest for many years. About 1,500 competitors from 32 countries will enjoy five days of world class racing, preceded by the Guadeloupe to Antigua Race and the Peters & May Round Antigua Race. Thousands more will join in the party celebrations, with seven beach days and party nights, including internationally acclaimed artist Damian Marley heading an all-star line-up for Reggae in the Park in the historic Nelson’s Dockyard.

British boats have been coming to Antigua Sailing Week since the first regatta in 1968. Sir Peter Harrison’s Farr 115, Sojana was the last British team to win the coveted Lord Nelson Trophy and the magnificent ketch is back, gleaming after a major refit intent on a close battle with Jean-Paul Riviere’s Finot 100, Nomad IV. Ross Applebey’s Oyster 48, Scarlet Oyster, Sir Richard Matthews’ Humphries 38, Oystercatcher XXXI and Chris Jackson’s First 40, Arthur can be counted as British boats to watch this year. 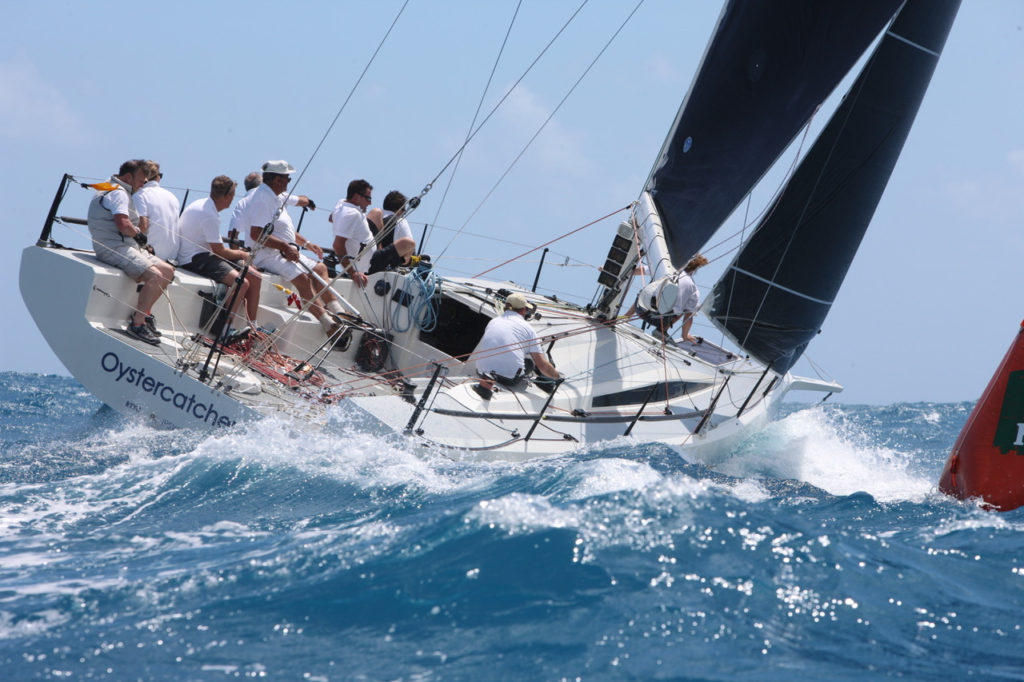 “I’m making no predictions for 2017 except that I’m certain we will all have a great time,” explained Matthews. “Our crew includes Saskia Clark, our tactician who won an Olympic Gold Medal in the 470 class in Rio and was subsequently named Rolex Female World Sailor of the Year and honoured with an MBE in the UK. Saskia comes from Mersea Island, my home town on the UK’s East Coast, so now you have a golden girl for the regatta’s golden 50th edition.”

“All you can do is try to win your class and if you do that, maybe, just maybe, it will be your year,” says Scarlet Oyster’s Ross Applebey. “Do we want to win the Lord Nelson Trophy? Damn right we do!” 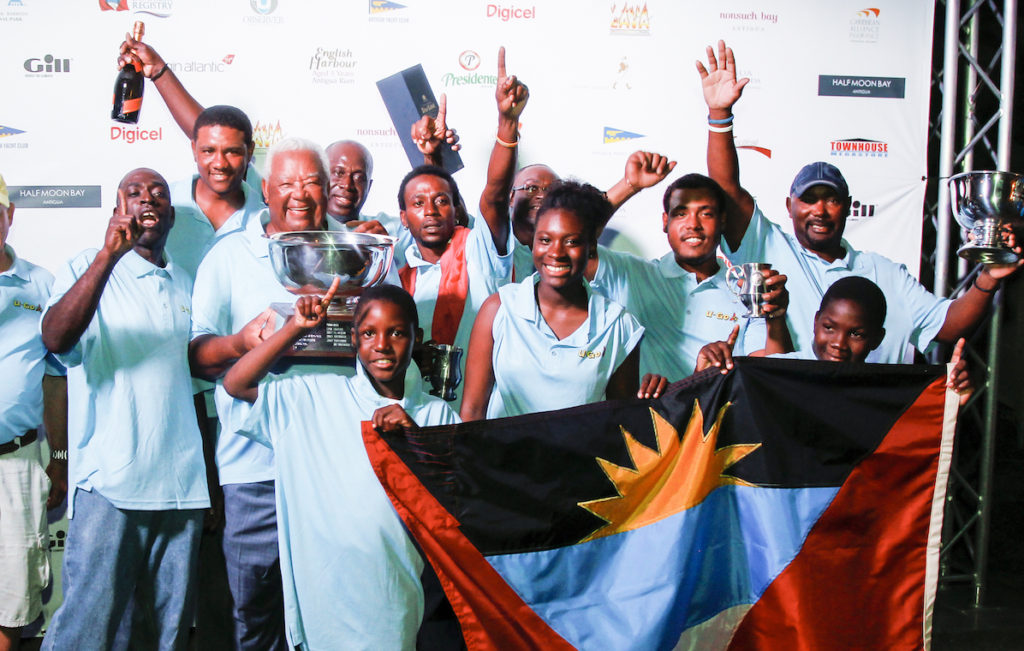 Antiguan hopes of winning will be lit up by a pack of well-sailed teams. Among them are two skippers, who have lifted the Lord Nelson Trophy at the last two events. 2016 winner, Jonty Layfield is back with a new Sleeper, a classic Swan 48, which has a pedigree of winning events all over Europe. Sir Hugh Bailey won the Lord Nelson Trophy for Antigua in 2016 and returns this year with his team racing his new boat, a Farr 45, Rebel. Antigua’s Bernie Evan-Wong won the best Caribbean boat in 2014 and will be racing his RP 37, TAZ again this year.

From St. Maarten, the duelling knights, Sir Robbie Ferron with Micron 99, Ossenfeffer and Sir Bobby Velasquez with L’Esperance are always up for a battle, as are Ben Jelic’s radical custom Kiwi 35, Wild Devil and Fritz Bus’ Melges 24, Island Waterworld. From St. Barths, Dave Cullen’s Royal Irish team racing J/109, Pocket Rocket came within a whisker of lifting the Lord Nelson Trophy in 2014 and will be a force to reckon with. From the Barbados YC, Peter Lewis’ J/105, Whistler is a proven winner as is the Bajan TP52 Conviction, skippered by Clint Brooks.

Almost 50 teams will be competing in the popular Bareboat Class and over half of them are from Germany, entered by Hartmut Holtmann’s KH+P yachtcharter, which has bought over 500 boats to the event since 1991 through his company.

“This year, we will be bringing 160 participants on 25 vessels,” exclaims Hartmut. “Herbert Münzel is here for his 30th event and some of our skippers have raced over the past 20 years and are returning for the 50th edition. These include Volkhard Berg and Mareike Ghur, one of our lady skippers, who first competed in 1998 and has gone on to win many trophies.” 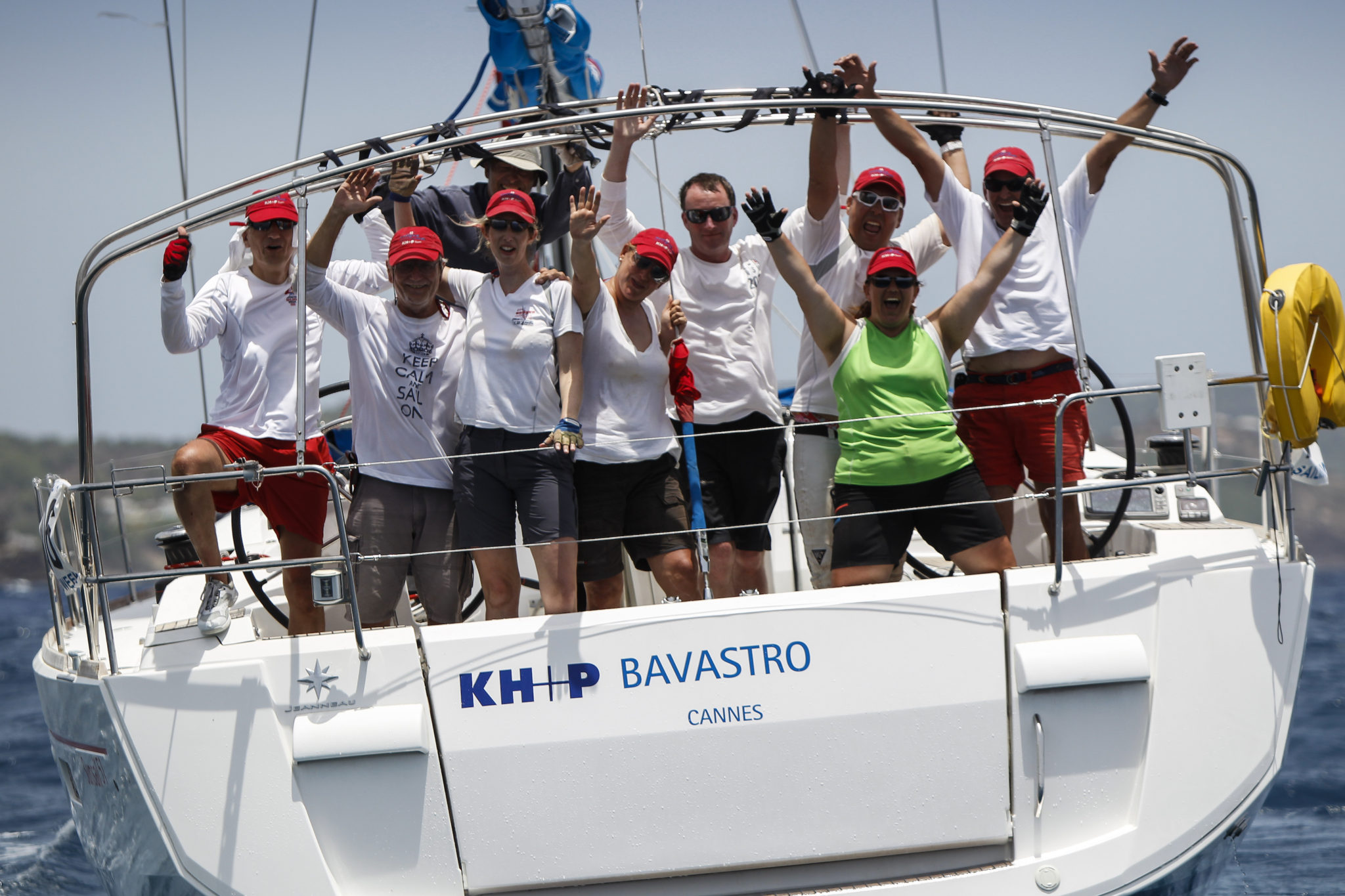 North and South American teams include Argentina, Canada and Puerto Rico, and there are over 10 entries from the United States. On 15 occasions, teams from the USA have won the Lord Nelson Trophy, more than any other nation.

Jim Kilroy’s Maxi Kialoa IV was the first USA team to compete in 1982 and this year, Kialoa III, sailed by the K3 Foundation will be racing and would love to see a repeat of their sister ship’s victory. American skipper, Bob Hillier on El Ocaso, leads one of the favoured teams. The J/122 came desperately close last year and is back, chartered by the Geneva Yacht Club. The all-American team, led by Texan Jim Hightower will be racing King 40, Hot Ticket, which has been impressive in the Caribbean all season. Puerto Rican hopes for victory may lie with Sergio Sagramoso’s Melges 32, Lazy Dog. 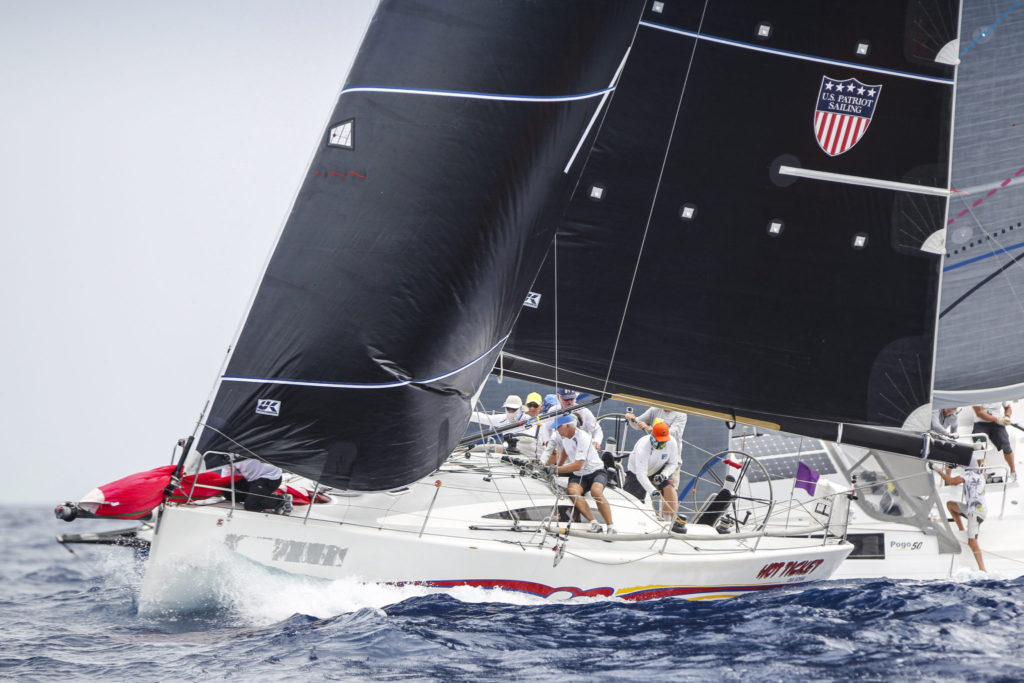 Baltic and Scandinavian countries include Lithuania, Norway, Poland and Sweden, as well as many entries from Russia, including a team from the Shantar Islands YC, racing Ormindo in the CSA Multihull Class. The Shantar Islands are located 15 miles off the East Coast of Russia in the Sea of Okhotsk, in the northern extremities of the Pacific Ocean, further east than Japan!

Sailors making a long journey to the 50th edition of Antigua Sailing Week will be from Australia, New Zealand and South Africa. The ten Australian crew racing the J/133, Jingaroos (Jings!) have notched up 22 x Sydney Hobart Yacht Races between them.

“We are coming to Antigua to redeem the most coveted item on our collective sailing bucket list – Antigua Sailing Week!” explains ‘Aussie Jings’ Headsail Trimmer, Jasmine Hogg. “It is everyone’s first time here and I had no problem in persuading the motley crew to make the trip for my big birthday. We are all absolutely thrilled to be taking part.” 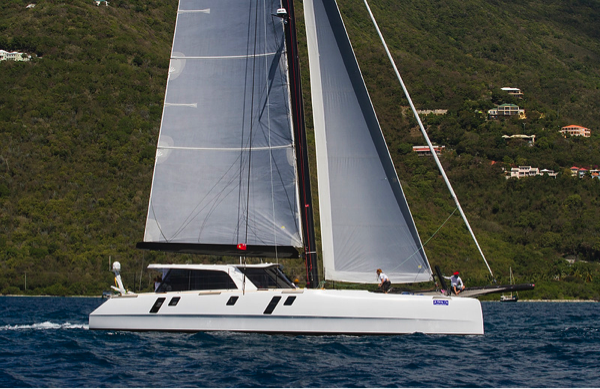 Eleven multihulls will be competing at Antigua Sailing Week, separated into Offshore and Cruising divisions. A magnificent battle is brewing in the Offshore Multihull Class with Fredrik Moe’s Jamaican Gunboat 60, Moementum, which includes Antiguan, Rhone Kirby amongst the crew, and Seamus Hourihan’s Gunboat 55, Thirst from the US Virgin Islands. Robert Szustkowski’s Polish flagged HH66, R-Six is on paper the fastest boat in the entire Antigua Sailing Week fleet, however, after time

correction, John Lawson’s TS42, BitterSharp, visiting from the French Alps, will be in the hunt for race wins. In the Multihull Cruising Class, Anthony McVeigh’s Bobby Dazzler is a 28ft pocket rocket that will have a David versus Goliath encounter with the 84ft Helicat Red, skippered by Russian explorer Sergey Ananov, who recently survived a helicopter crash in the icy waters of Greenland, fending off Polar Bears for two days!

With Antigua Sailing Week celebrating 50 years, it is also of great importance to be looking forward, as well as remembering the past, hence this year’s mantra: Old Traditions, New Ways. Sailing is now a part of the school curriculum in Antigua and Barbuda and many young Antiguan sailors will be participating this year, racing with their heroes, but also learning how to win by themselves. Teams from the National Sailing Academy, racing 1720s will be amongst them.

After the Guadeloupe to Antigua Race on Friday April 28 and Saturday’s Peters & May Round Antigua Race, five days of racing at Antigua Sailing Week will begin on Sunday April 30. To follow all the action visit: www.sailingweek.com. 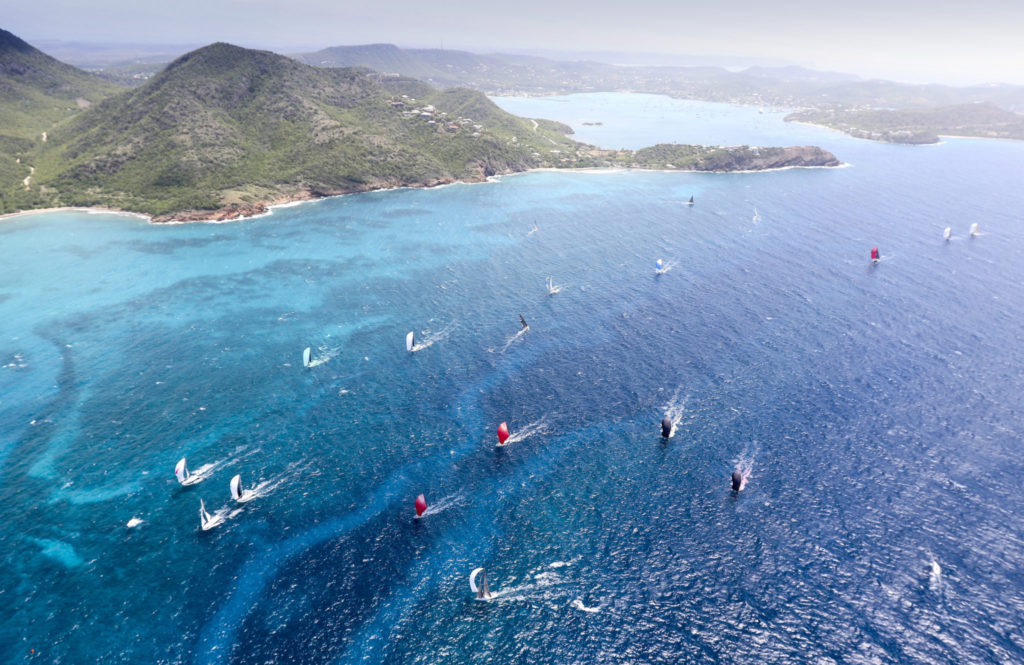 Let the celebrations begin! Anticipation is building for the start of the 50th edition of Antigua Sailing Week © Paul Wyeth/pwpictures.com