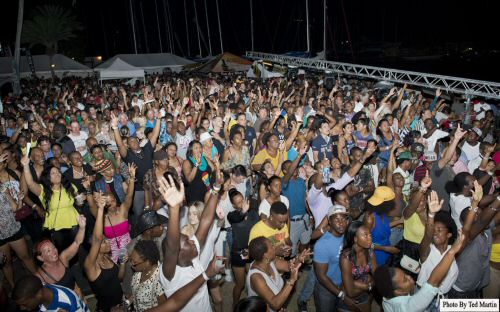 The biggest party night of Antigua Sailing Week lived up to all of its lively expectations from start to finish.

On Tuesday night, the dockside of the Nelson’s Dockyard rumbled to life with incredible music from a mix of DJ’s and a live band as scores of people who packed an improvised dance floor covered in club lights danced through the night.

The featured acts of the night were Tian Winter and his Iconic band and DJ’s Private Ryan of Trinidad and Woogie of the United States.

The music offerings of the night got going with DJ Woogie, who spun tunes from all parts of his globe as he brought an entertaining international flavor to the fete.

By this time the dance floor was bouncing and the vibe had already spilled over unto the lawns which was already teeming with people. Long lines at the entrance was evidence that stocked bars were going to be under severe threat and that the entertainers to come could not disappoint.

Tian Winter, Antigua’s leading soca artist, backed by his Iconic band got the crowd dancing, responding to his every instruction to dance and throw hands in the air.

The night was far from over. The pace was nicely set by the Winter man, but what was to come is the stuff that Antigua Sailing Week memories are made of.

DJ Private Ryan took the temperature to even higher levels on a cool night, keeping the hundreds unmoved even as the showers threatened.

The crowd was sent into a frenzy as he went into his archives for some of the hits of years gone by and pleased visitors and locals alike with popular soca hits, the type which has gained him fame as a leading soca DJ.

With Tuesday night’s entertainment creating an heightened buzz, it was down to the beach on Wednesday for the traditional Lay Day activities.