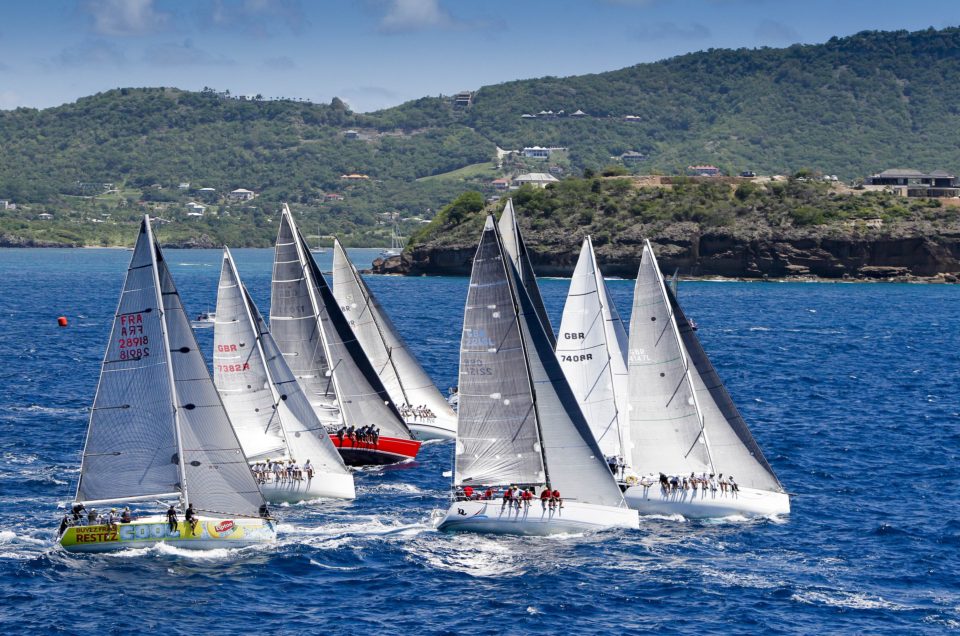 More than 100 boats registered from 30 countries worldwide and crews from many more will be taking part in a nine-day festival of thrilling racing and fun-filled shoreside events that is Antigua Sailing Week. Over a thousand competitors will experience the world class sailing grounds of Antigua, joined by thousands more party-goers ashore, soaking up the sunshine and legendary atmosphere of Antigua Sailing Week, the Caribbean’s longest running regatta.

“The DNA of Antigua Sailing Week is professional race management and fun ashore after racing,” commented Commercial Director of Antigua Sailing Week, Alison Sly-Adams. “Last year we celebrated 50 years of Antigua Sailing Week and this year we see as the start of the next half-century. We have a great format with 3-4 hours of racing each day off the South-East coast of Antigua. Once competitors get ashore they experience fantastic events suitable for everyone. We have tried hard to listen to what the competitors want and also provide a great environment for non-racing friends and family who can get out to watch the action with ‘Chase the Race’ and enjoy lunch and snorkelling before joining the party ashore.”

Over 70 yachts will be racing in the CSA Classes and winning skippers of the famous Lord Nelson Trophy will be competing, including two from Antigua; Sir Hugh Bailey with Rebel and Jonty Layfield with Sleeper X. Sir Peter Harrisons’ 115ft British superyacht Sojana won the Lord Nelson Trophy in 2011 and is back this year to defend their 2017 win in CSA1. 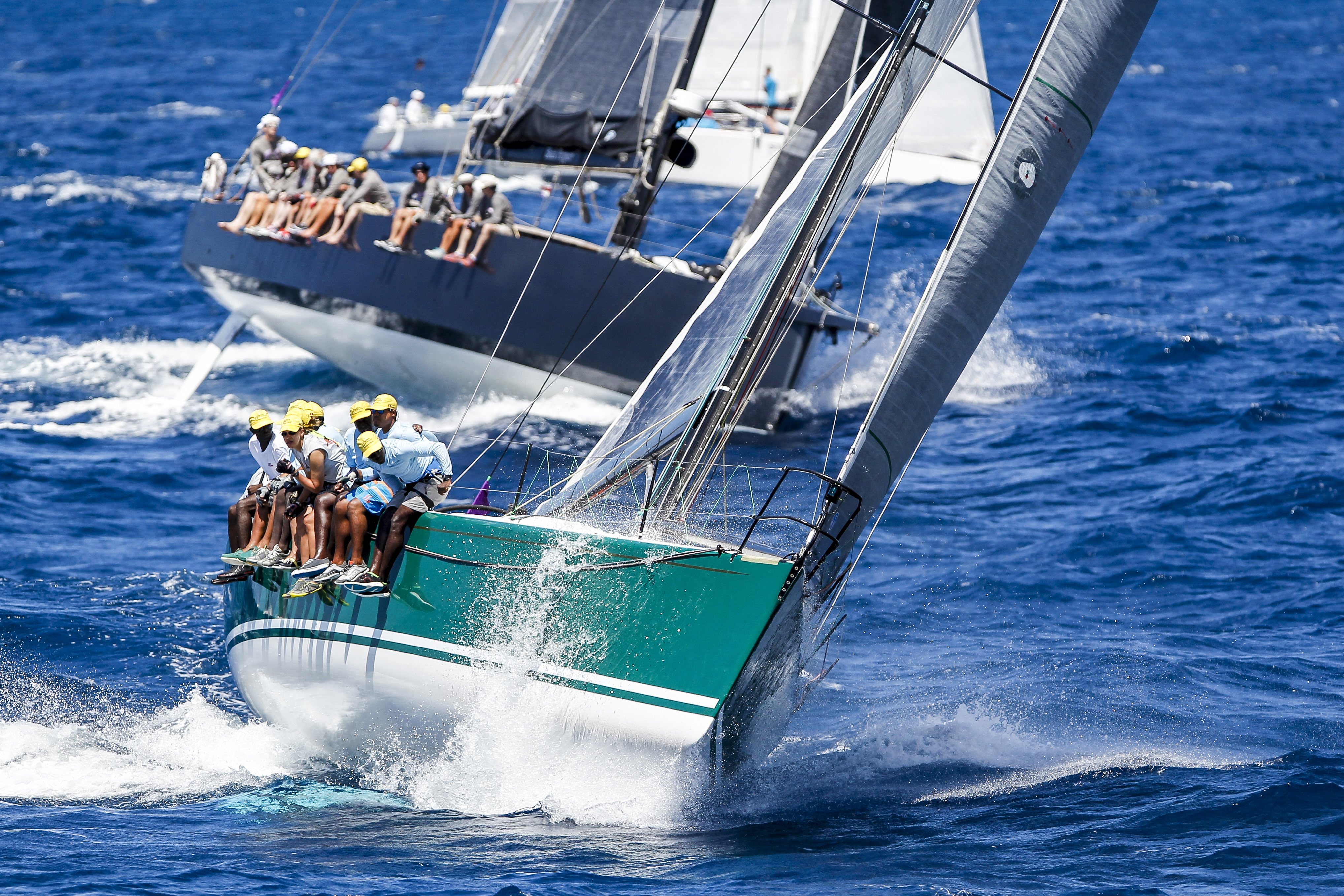 Past winners of the Lord Nelson Trophy return for the 2018 edition of Antigua Sailing Week and include Sir Hugh Bailey’s Team Rebel © Paul Wyeth/pwpictures.com 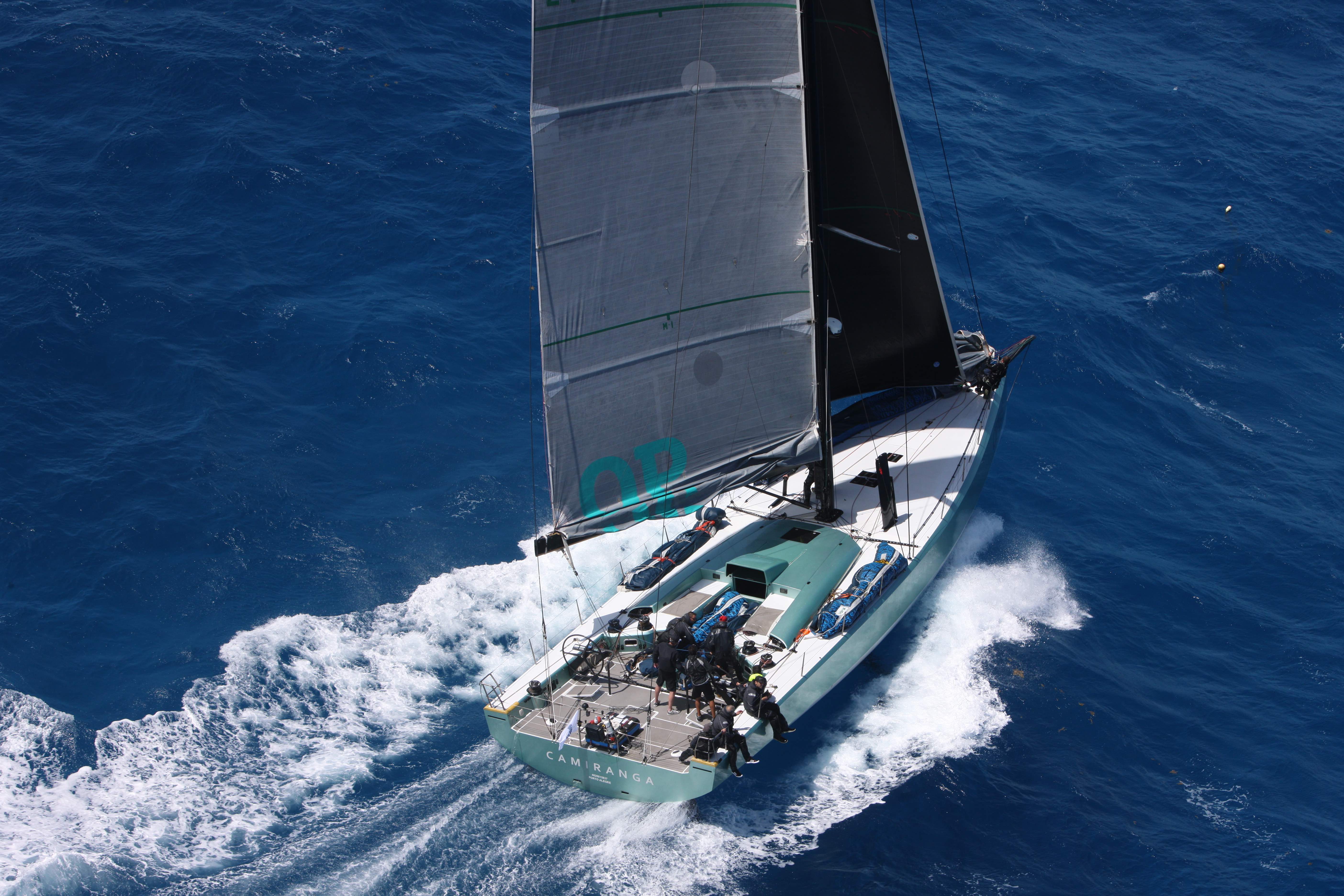 The CSA racing fleet has a huge variety of professional and corinthian sailors young and old. Teenage skippers include Briton Louie Neocleous, racing Beneteau Oceanis 55 Julia. Antigua National Sailing Academy’s Jules Mitchell racing 1720 NSA Spirit will have a wonderful battle with the Greig City Academy Team, whose crew will be made up of 14-17 year old pupils from the North London school. Last year’s CSA 7 winning skipper Robbie Ferron returns, this time at the helm of the modified 6 Metre Biwi Magic, and 2017 CSA 9 winner Rodney Dodd is back with Jeanneau 54 Blue Fin.

In the Bareboat Division, Antigua Sailing Week’s Official Exclusive Sponsor Dream Yacht Charter has all but sold out of yachts for the regatta; just one Dufour 405 remains available in Antigua. Assisted by KH+P Charter, 12 German teams make up the biggest entry by country, including Thomas Sparrer’s KH+P Kadans which will be defending their 2017 win in Bareboat 1. Cannon & Harvey’s American KHS&S Contractors won the Dream Yacht Charter Trophy last year; the Florida based team will be returning and hope to win another free week’s yacht charter. 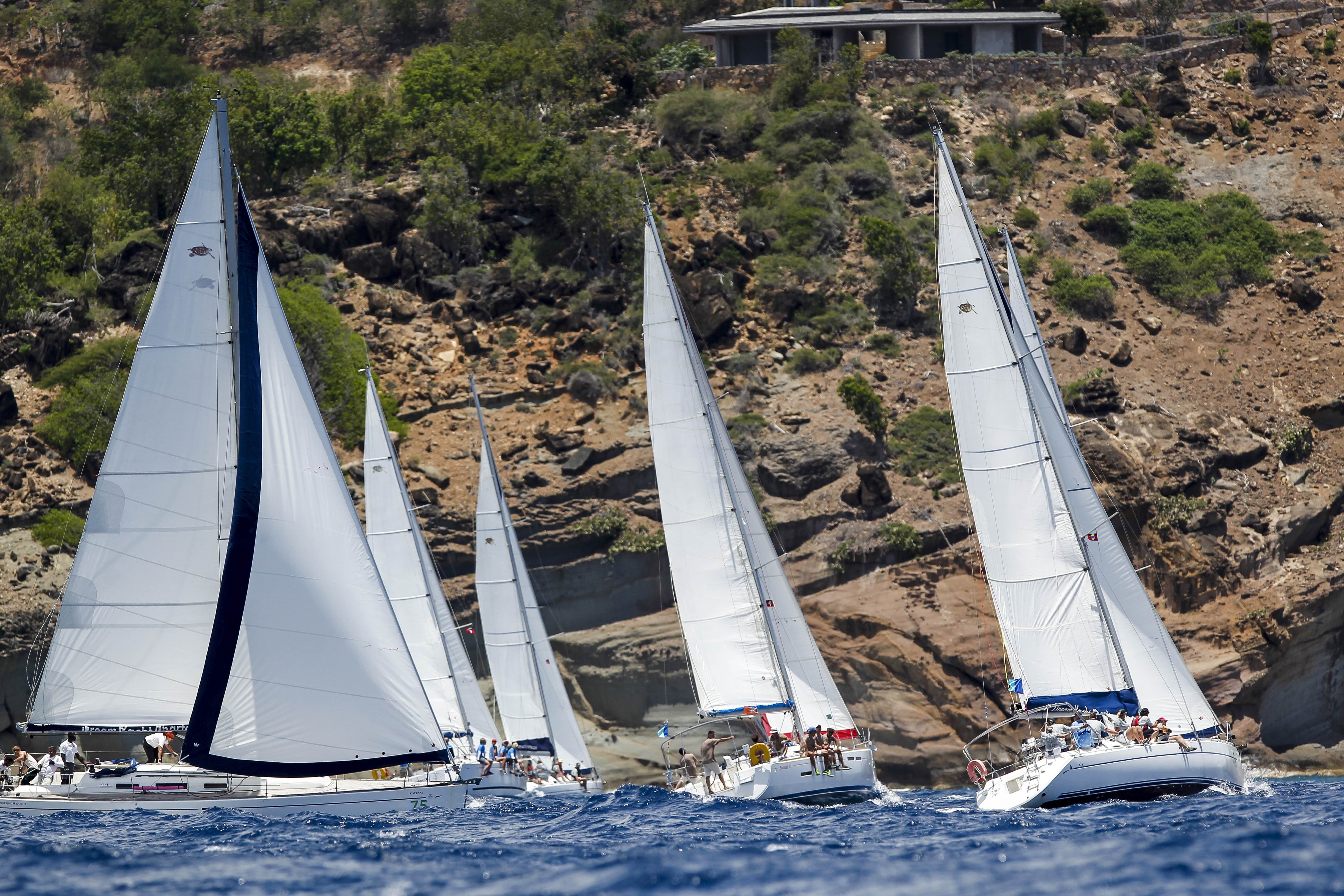 An impressive bareboat fleet will see plenty of competitive action on the water
© Paul Wyeth/pwpictures.com

The Club Class has shown a big increase in popularity with more than 10 boats expected. No downwind sails are permitted and a Progressive Handicapping system is used for scoring which is adjusted each day. The Class makes Antigua Sailing Week more accessible to less serious racers at a lower cost. It is designed for those who want to have fun while participating in the on-the-water action.

Racing kicks off with the stand-alone Peters & May Round Antigua Race on Saturday 28 April followed by six days of Antigua Sailing Week. Whilst racing always comes first at Antigua Sailing Week, the shoreside fun is very much part of the regatta. Competitors gather after racing for the daily prize giving. On Tuesday 1 May, internationally acclaimed reggae artiste, Tarrus Riley is set to headline at Reggae in the Park along with DJ Puffy and Private Ryan, one of the most highly anticipated events on the Antigua Sailing Week Party Calendar. After the big party night, the Wadadli Lay Day Beach Party will this year include fun dinghy and SUP racing and zany beach games along with a line-up of seven DJs.

The Final Awards Ceremony & Party is always a memorable occasion and the fun doesn’t stop there, with Dockyard Day and the Inet Dickenson Bay Beach Bash closing the regatta for 2018. 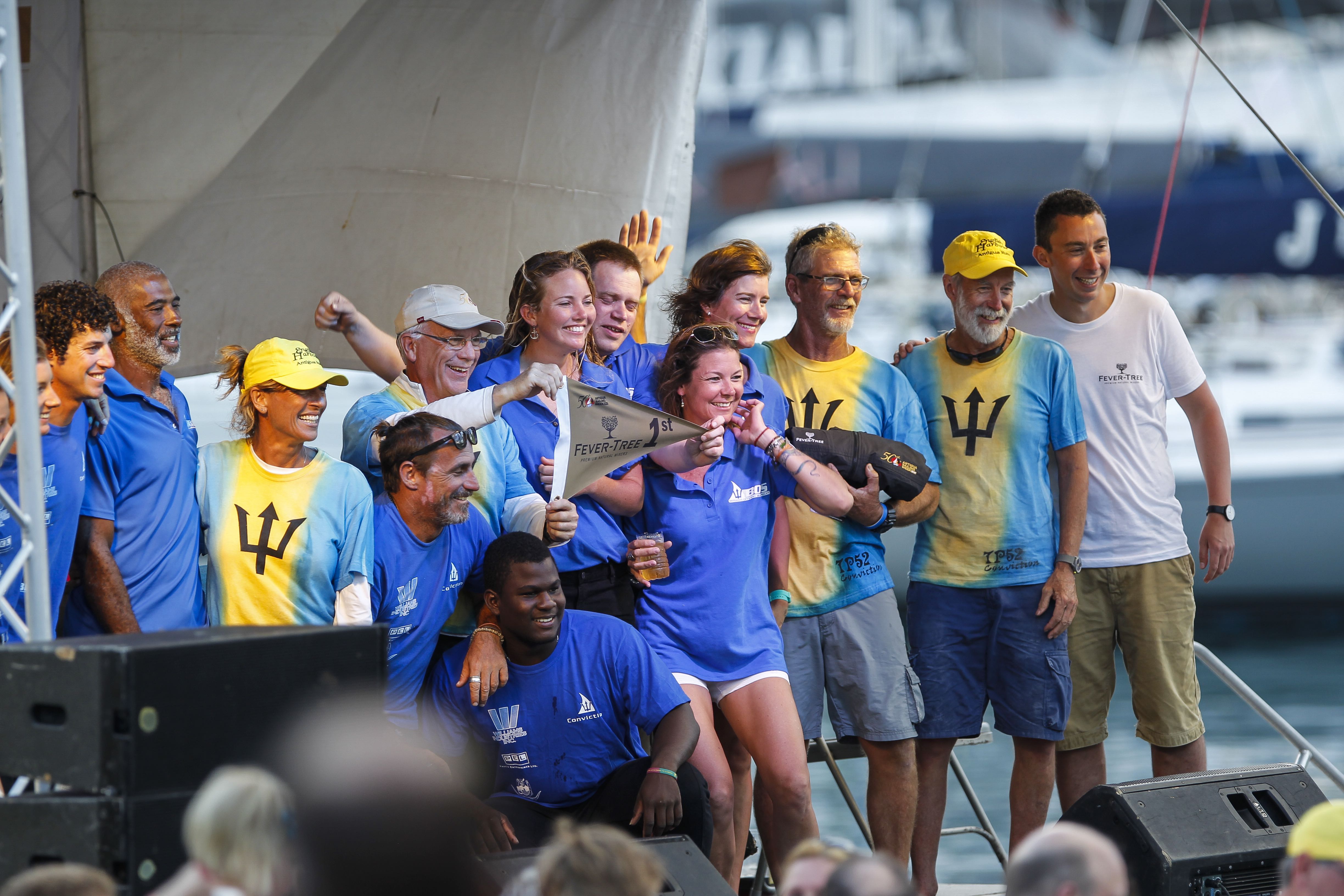 Daily prizegivings and the Final Awards Ceremony – one of the highlights for the teams competing © Paul Wyeth/pwpictures.com 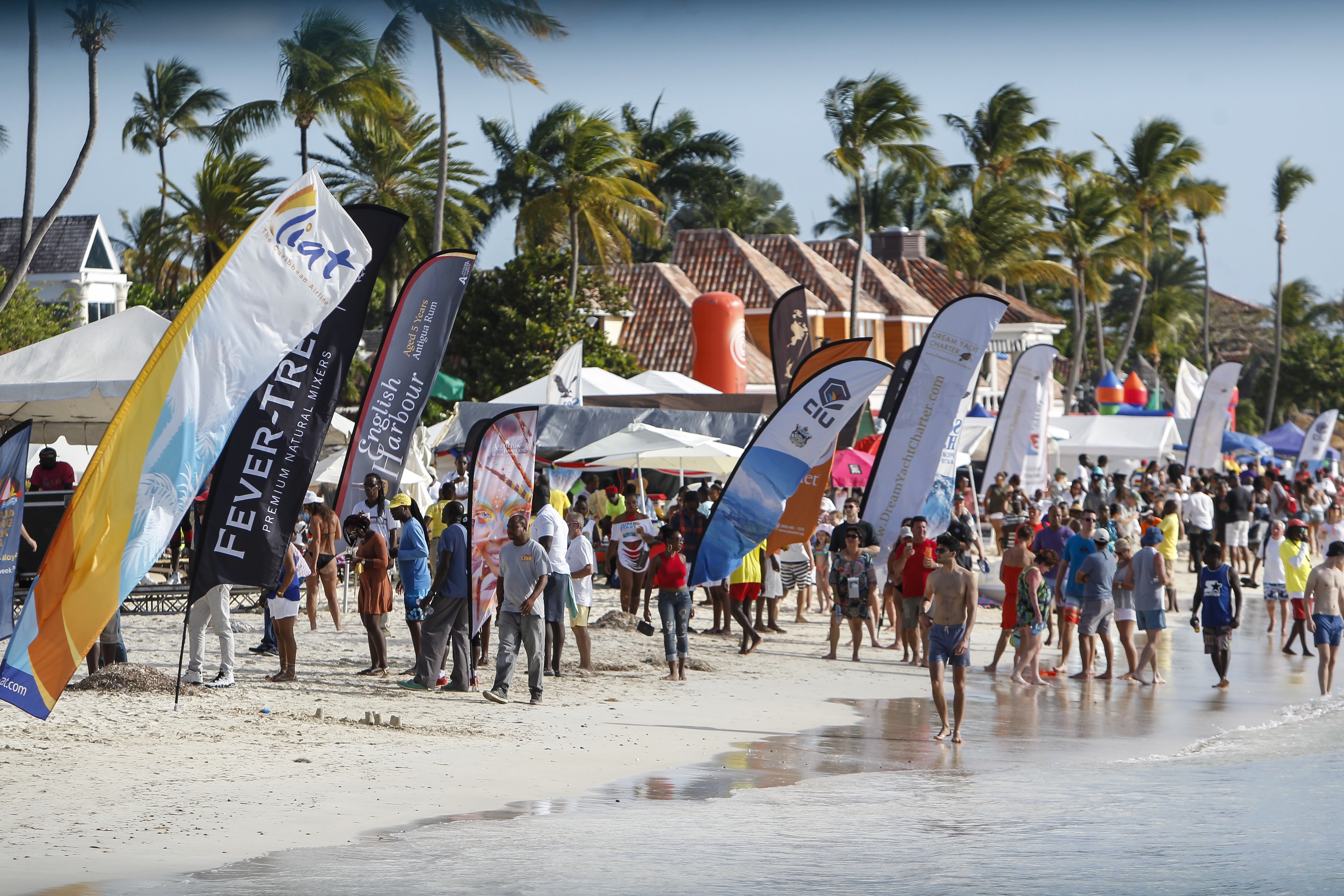 Open to all: Plenty of fun on and off the water throughout Antigua Sailing Week
© Paul Wyeth/pwpictures.com